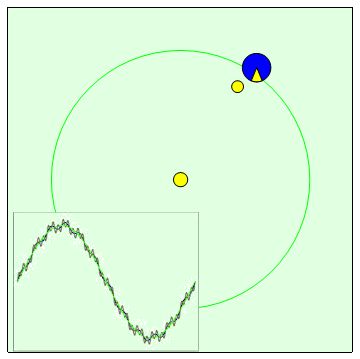 So you think you’re standing still?  Let’s run some circles, all variations on the theme of 2πR…

I’m writing this in Denver, at 39.75oN, where the circumference perpendicular to the axis of rotation is only 19,200 miles.  Sitting here I’m circling the Earth at 800 miles per hour.  But that’s not all.

The Earth and the Moon both revolve around their common center of gravity (their barycenter).  The barycenter is inside the Earth, offset from its center by 2881 miles.  The center of the Earth runs a circle around the barycenter once every month (27.3 days), at a relatively piddly 27.6 miles per hour.  But that’s not all.

Earth’s orbit is (nearly) a circle.  The orbit’s radius is 93 million miles so its circumference is 584 million miles.  If you ran that many miles in a year you’d have to hit a pace of 66,600 miles per hour (no rest stops).  But that’s not all.

The Sun’s not just standing still all alone in space.  It’s part of the Milky Way Galaxy, which rotates once per 230 million years.  The Sun is about 26,000 light-years (152.8 quadrillion miles) from the center of the galaxy, so in one cycle it travels some 960 quadrillion miles.  That’s a rate of 476,000 miles per hour.  But that’s not all.

The Milky Way is one of about 50 galaxies in the Local Group.  The galaxies move with respect to each other and the whole assembly undoubtedly rotates.  Unfortunately, the astronomers are just now devising technology that can measure all that motion.  Expect large numbers for the net speeds when they figure them out.  But that’s not all.

The entire Local Group is flying towards a point in the constellation Centaurus.  Our flight speed has been measured at about 1,430,000 miles per hour.  The astronomers think the flight is linear, but on a larger scale it may be part of yet another rotation.

Feeling a bit dizzy?  Have a frosty glass of iced tea with your delicious π and just let the Earth spin along.