“Simple arithmetic, Vinnie.  Cathleen said that most-distant galaxy is 13 billion lightyears away.  I primed Old Reliable with Hubble’s Constant to turn that distance into expansion velocity and compare it with lightspeed.  Here’s what came up on its screen.”

“Whoa, Sy.  Do you read the final chapter of a mystery story before you begin the book?”

“Of course not, Cathleen.  That way you don’t know the players and you miss what the clues mean.”

“Which is the second of Vinnie’s questions.  Let’s take it a step at a time.  I’m sure that’ll make Vinnie happier.”

“Just another distance unit, like a mile or kilometer but much bigger.  You know that a lightyear is the distance light travels in an Earth year, right?”

“About six trillion miles, 9½ trillion kilometers.  Multiply the kilometers by 3.26 to get parsecs.  And no, I’m not going to explain the term, you can look it up.  Astronomers like the unit, other people put it in the historical-interest category with roods and firkins.”

“Is that weird ‘km/sec/Mparsec’ mix another historical thing?”

“Uh-huh.  That’s the way Hubble wrote it in 1929.  It makes more sense if you look at it piecewise.  It says for every million parsecs away from us, the outward speed of things in general increases by 70 kilometers per second.”

“That helps, but it mixes old and new units like saying miles per hour per kilometer.  Ugly.  It’d be prettier if you kept all one system, like (pokes at smartphone screen) … about 2.27 km/sec per 1018 kilometers or … about 8 miles an hour per quadrillion miles.  Which ain’t much now that I look at it.”

“Not much, except it adds up over astronomical distances.  The Andromeda galaxy, for instance, is 15×1018 miles away from us, so by your numbers it’d be moving away from us at 120,000 miles per hour.”

“Wait, Cathleen, I thought Andromeda is going to collide with the Milky Way four billion years from now.” 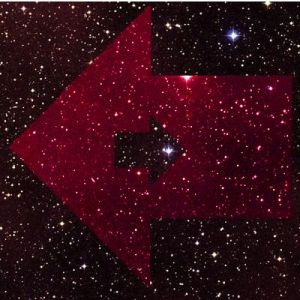 “It is, Sy, and that’s one of the reasons why Hubble’s original number was so far off.  He only looked at about 50 close-by galaxies, some of which are moving toward us and some away.  You only get a view of the general movement when you look at large numbers of galaxies at long distances.  It’s like looking through a window at a snowfall.  If you concentrate on individual flakes you often see one flying upward, even though the fall as a whole is downward.  Andromeda’s 250,000 mph march towards us is against the general expansion.”

“Like if I’m flying a plane and the airspeed indicator says I’m doing 200 but my ground-speed is about 140 then I must be fighting a 60-knot headwind.”

“Exactly, Vinnie.  For Andromeda the ‘headwind’ is the Hubble Flow, that general outward trend.  If Sy’s calculation were valid, which it’s not, then that galaxy 13 billion lightyears from here would indeed be moving further away at  93% of lightspeed.  Someone living in that galaxy could shine a 520-nanometer green laser at us.  At this end we see the beam stretched by 193% to 1000nm.  That’s outside the visible range, well into the near-infrared.  All four visible lines in the hydrogen spectrum would be out there, too.”

“So that’s why ‘old hydrogens’ look different — if they’re far enough away in the Hubble Flow they’re flying away from us so fast all their colors get stretched by the red-shift.”

“Two things, Sy.  Because the velocities are close to lightspeed, you need to apply a relativistic correction factor.  That velocity ratio Old Reliable reported — call it b.  The proper stretch factor is z=√ [(1+b)/(1–b)].  Relativity takes your 93% stretch down to (taps on laptop keyboard) … about 86%.  The bluest wavelength on hydrogen’s second-down series would be just barely visible in the red at 680nm.”

“What’s the other thing?”

“The Hubble Constant can’t be constant.  Suppose you run the movie backwards.  The Universe shrinks steadily at 70 km/sec/Mparsec.  You hit zero hundreds of millions of years before the Big Bang.”

“The expansion must have started slow and then accelerated.”