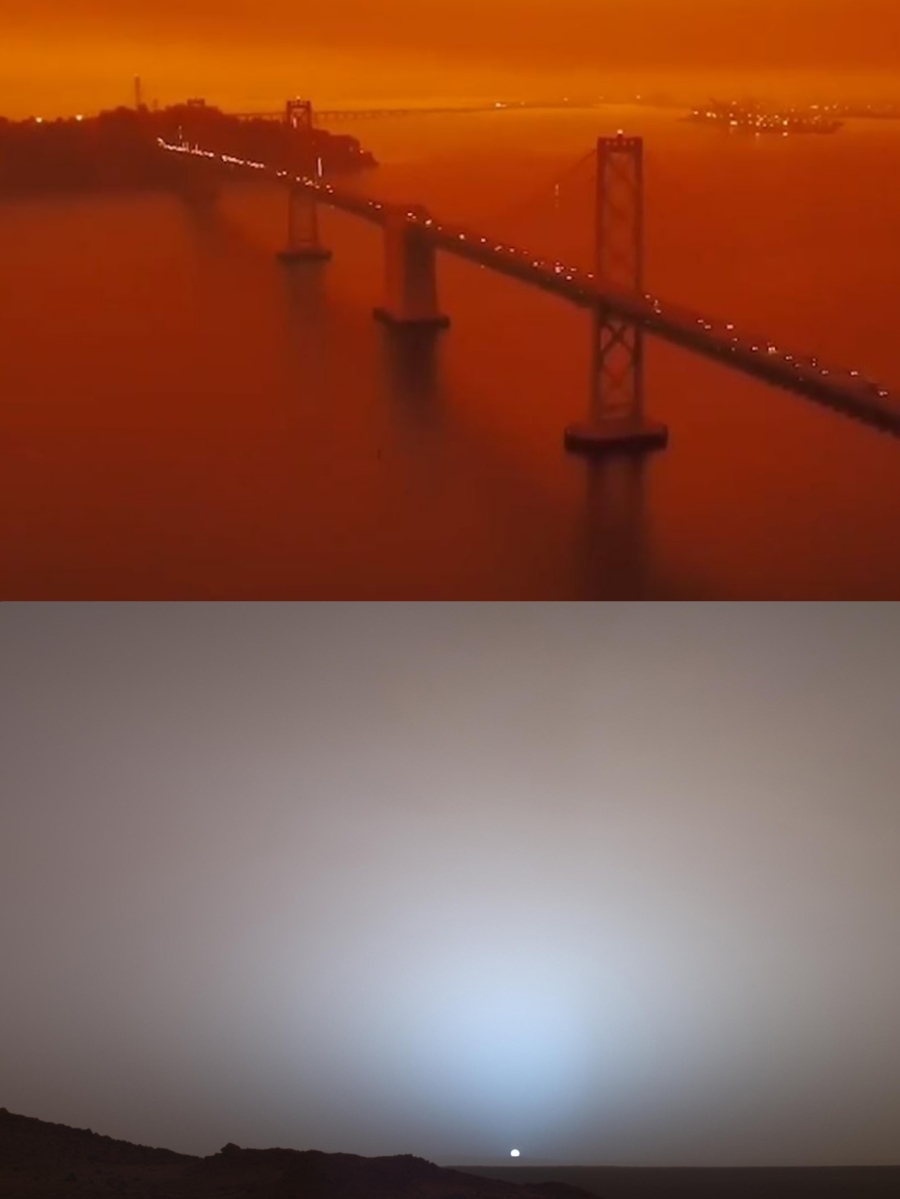 A crisp Fall dawn, crisp fallen leaves under my feet as I jog the path by the park’s lake.

“Hey! Moire! How about these red sunrises and sunsets? Remind you of Mars?”

“Morning, Mr Feder. Not much, and definitely not dawn or dusk. Those tend more to blue, as a matter of fact.”

“Waitaminnit, Moire. I seen that Brad Pitt Martian movie, him driving hisself all alone across that big plain — the place is blood‑red.”

“Think a minute, Mr Feder. If he was all alone, who was running the cameras?”

“Uhhh, right. Movie. Yeah, they were really on Earth so they could director the lighting and all. But they said they’d scienced the … heck out of it.”

“Oh they did, better than most movies, but artistic license took over in a couple of places. People expect Mars to be red, not mostly clay colored like it really is, so the producers served up red.”

“Wait, I remember the conversation about Earth is blue because of the oceans and Mars is red because of its rusty atmosphere. So what’s with the sky colors?”

“Looking up at sunlight through an atmosphere is very different from looking down at the surface. It all has to do with how what’s in the atmosphere interacts with sunlight. Take Earth’s blue sky, for instance.”

“Sure it is. OK, the Sun’s disk takes up much less than 1% of the sky but that’s enough to give us all our sunlight photons. A fraction of them run into something on the way down to Earth’s surface. What happens depends on how big the something is compared to the photon wavelength. Much larger things, maybe an airplane, completely block the photons and we get a shadow.”

“Yeah, but life’s more interesting for smaller somethings. For things like air molecules and dust particles that are much smaller than the the wavelength of visible light, the waves generally swerve around the particle. How much they swerve depends on the wavelength — extreme blue light bends about ten times more than extreme red light for the same scattering particle. So suppose there’s a kid a few miles away from us looking at the sky while we’re looking at it here. There’s a sunbeam with a rainbow‑load of photons headed for the kid, but there are dust particles in the way. Get the picture?”

“So some of the light swerves. The red swerves a little but the blue light swerves ten times as much, enough that it heads straight for us. What color do we see when we look in that direction?”

“Blue everywhere in the lit‑up sky except when we look straight at the Sun.”

“What about these pretty red sunsets and the red skies over the wildfires?”

“Two different but related phenomena. Sunsets first. An incoming photon with just the right wavelength may simply be absorbed by a molecule. Doesn’t happen often, but there’s lots of molecules. Turns out that oxygen and ozone absorb blue light more strongly than red light. When we’re looking horizontally towards a sunset we’re looking through many more oxygen molecules than when we look vertically. We see the red part of a blue‑filtered version of that swerve rainbow.”

“And the fire skies?”

“The fires released huge amounts of fine smoke particles, just the right size for color‑scattering. Blue light swerves again and again until it’s either absorbed or shot out to space. Red light survives.”

“So what’s different about Mars?”

“Three things — Mars dust is different from Earth’s, its atmosphere is a lot thinner, and there’s practically no atmospheric water or oxygen. Rusty Mars dust is the size of smoke particles. With no rain or snow to settle out the dust, it stays aloft all the time. Rust is red because it absorbs blue light and reflects only the red part. With less diffused sunlight, Mars’ sky is basically the black of space overlaid with a red tint. Sunsets are blue‑ish because what blue light there is can travel further.”