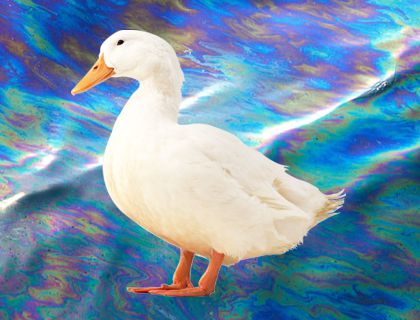 Mr Richard Feder of Fort Lee NJ is in terrible shape. Barely halfway into our walk around the park’s lake, he flops onto a bench to catch his breath. The geese look on unsympathetically. “<puff, puff> I got another question, Moire. <wheeze> Why is water wet?”

He’s just trying to make conversation while his heart slows down but I take him up on it. “Depends on what you mean by ‘wet‘ — that’s a slippery word, can be a verb or an adjective or a noun. If you wet something, you’ve got a wet something. If there’s wet weather you go out in the wet. If you live in a wet jurisdiction you can buy liquor if you’re old enough. You can even have wet and dry molecules. Which are you asking about?”

That’s gotten him thinking, always a good sign. “Let’s start with the verb thing. Seems like that’s the key to the others.”

“So we’re asking, ‘Does water wet?‘ The answer is, ‘Sometimes,‘ and that’s where things get interesting. That duck over there, diving for something on the bottom, but when it comes back up again the water rolls off it like –“

“Don’t say it — ‘like water off a duck’s back‘ — yeah, I know, but I’m sweating over here and that ain’t rolling off. Why the difference?”

“Blame it on the Herence twins, Co and Addie.”

“A little joke, has to do with two aspects of stickiness. Adherence is … you know adhesive tape?”

“Polarity. I don’t want to get into the weeds here –“

“Better not, the ground’s squishy over there.”

“– but there are certain pairs of atoms, like oxygen and hydrogen, where one atom pulls a small amount of electron charge away from the other and you wind up with part of a molecule being plus-ish and another part being minus-ish. That makes the molecule polar. Other pairings, like carbon and hydrogen, are more evenly matched. You don’t get charge separation from them and we call that being non-polar. Charge variation in polar molecules forces them to cluster together positive-to-negative. The electrostatic gang crowds out any nearby non-polar molecules.”

“What’s all that got to do with wetting?”

“Water’s all oxygen and hydrogen and quite polar. Water coheres to itself. If it didn’t you’d get rain-smear instead of raindrops. It also adheres to polar materials like skin and hair and bricks, so raindrops wet them. But it doesn’t adhere to non-polar materials like oil and wax. Duck feathers are oily so they shed water.”

“So that’s why the duck doesn’t get wet!”

“Not unless you throw detergent on him, like they have to do with waterfowl after an oil spill. Detergent molecules have a polar end and a non-polar end so they can bridge the electro divide. Rubbing detergent into a dirty bird’s sludgy oil coating lets water sink into the mess and break it up so you can rinse it off. The problem is that the detergent also washes off the good duck oil. If you let a washed-off duck go swimming too soon after his bath the poor thing will sink. You have to give him time to dry off and replenish his natural feather-oil.”

“Hey, you said ‘wet-and-dry molecules.’ How can they be both?”

“Because they’re really big, thousands of atoms if they’re proteins, even bigger for other kinds of polymers. Anything that large can have patches that are polar and other patches that are oily. In fact, patchwise polarity is critical to how proteins get their 3-D structure and do their jobs. A growing protein strand wobbles around like a spring-toy puzzle until positive bits match up with negative bits and oily meets up with oily. Probably water molecules sneak into the polar parts, too. The configuration’s only locked down when everything fits.”