250 years ago, when people were getting used to the idea that the planets circle the Sun and not the other way around, they wondered how that worked.  Isaac Newton said, “I can explain it with my Laws of Motion and my Law of Gravity.”

The first Law of Motion is that an object will move in a straight line unless acted upon by a force.  If you’re holding a ball by a string and swing the ball in a circle, the reason the ball doesn’t fly away is that the string is exerting a force on the ball.  Using Newton’s Laws, if you know the mass of the ball and the length of the string, you can calculate how fast the ball moves along that circle.

Newton said that the Solar System works the same way.  Between the Sun and each planet there’s an attractive force which he called gravity.  If you can determine three points in a planet’s orbit, you can use the Laws of Motion and the Law of Gravity to calculate the planet’s speed at any time, how close it gets to the Sun, even how much the planet weighs.

Astronomers said, “This is wonderful!  We can calculate the whole Solar System this way, but… we don’t see any strings.  How does gravity work?”

Newton was an honest man.  His response was, “I don’t know how gravity works.  But I can calculate it and that should be good enough.”

And that was good enough for 250 years until Albert Einstein produced his Theories of Relativity.  This graphic shows one model of Einstein’s model of “the fabric of space.”  According to the theory, light (the yellow threads) travels at 186,000 miles per second everywhere in the Universe.

As we’ve seen, the theory also says that space is curved and compressed near a massive object.  Accordingly, the model’s threads are drawn together near the dark circle, which could represent a planet or a star or a black hole.  If you were standing next to a black hole (but not too close). you’d feel fine because all your atoms and the air you breathe would shrink to the same scale.  You’d just notice through your telescope that planetary orbits and other things in the Universe appear larger than you expect.

This video shows how a massive object’s space compression affects a passing light wave.  The brown dot and the blue dot both travel at 186,000 miles per second, but “miles are shorter near a black hole.”  The wave’s forward motion is deflected around the object because the blue dot’s miles are longer than the miles traveled by the brown dot.

When Einstein presented his General Theory of Relativity in 1916, his calculations led him to predict that this effect would cause a star’s apparent position to be altered by the Sun’s gravitational field.

An observer at the bottom of this diagram can pinpoint the position of star #1 by following its light ray back to the star’s location.  Star #2, however, is so situated that its light ray is bent by our massive object.  To the observer, star #2’s apparent position is shifted away from its true position.

In 1919, English physicist-astronomer Arthur Eddington led an expedition to the South Atlantic to test Einstein’s prediction.  Why the South Atlantic?  To observe the total eclipse of the sun that would occur there.  With the Sun’s light blocked by the Moon, Eddington would be able to photograph the constellation Taurus behind the Sun.

Sure enough, in Eddington’s photographs the stars closest to the Sun were shifted in their apparent position relative to those further way.  Furthermore, the sizes of the shifts were almost embarrassingly close to Einstein’s predicted values.

Eddington presented his photographs to a scientific conference in Cambridge and thus produced the first public confirmation of Einstein’s theory of gravity.

Wait, how does an object bending a light ray connect with that object’s pull on another mass?  Another piece of Einstein’s theory says that if a light ray and a freely falling mass both start from the same point in spacetime, both will follow the same path through space.  American physicist John Archibald Wheeler said, “Mass bends space, and bent space tells mass how to move.”

If you’re reading this post, you’ve undoubtedly seen at least one diagram like the above — a black hole or a planet or a bowling ball makes a dent in a rubber sheet and that’s supposed to explain Gravity.  But it doesn’t, and neither does this spirally screen-grab from Brian Greene’s presentation on Stephen Colbert’s Late Show: 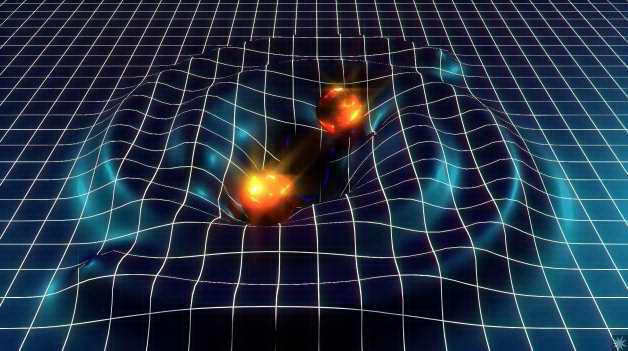 <Blush> I have to admit that the graphic I used a couple of weeks ago is just as bad.

Of all the wave varieties we’re familiar with, gravitational waves are most similar to (NOT identical with!!) sound waves.  A sound wave consists of cycles of compression and expansion like you see in this graphic.  Those dots could be particles in a gas (classic “sound waves”) or in a liquid (sonar) or neighboring atoms in a solid (a xylophone or marimba).

Contrary to rumor, there can be sound in space, sort of.  Any sizable volume of “empty” space contains at least a few atoms and dust particles.  A nova or similar sudden event can sweep particles together and give rise to successive waves that spread as those local collections bang into particles further away.  That kind of activity is invoked in some theories of spiral galaxy structure and the fine details of Saturn’s rings.

In a gravitational wave, space itself is compressed and stretched.  A particle caught in a gravitational wave doesn’t get pushed back and forth.  Instead, it shrinks and expands in place.  If you encounter a gravitational wave, you and all your calibrated measurement gear (yardsticks, digital rangers, that slide rule you’re so proud of) shrink and expand together.  You’d only notice the experience if you happened to be comparing two extremely precise laser rangers set perpendicular to each other (LIGO!).  One would briefly register a slight change compared to the other one.

Light always travels at 186,000 miles per second but in a compressed region of space those miles are shorter.

Einstein noticed that implication of his Theory of General Relativity and in 1916 predicted that the path of starlight would be bent when it passed close to a heavy object like the Sun.  The graphic shows a wave front passing through a static gravitational structure.  Two points on the front each progress at one graph-paper increment per step.  But the increments don’t match so the front as a whole changes direction.  Sure enough, three years after Einstein’s prediction, Eddington observed just that effect while watching a total solar eclipse in the South Atlantic.

Unlike the Sun’s steady field, a gravitational wave is dynamic. Gravitational waves are generated by changes in a mass configuration.  The wave’s compression and stretching forces spread out through space.

Here’s a simulation of the gravitational forces generated by two black holes orbiting into a collision.  The contours show the net force felt at each point in the region around the pair.

We’re being dynamic here, so the simulation has to include the fact that changes in the mass configuration aren’t felt everywhere instantaneously.  Einstein showed that space transmits gravitational waves at the speed of light, so I used a scaled “speed of light” in the calculation.  You can see how each of the new features expands outward at a steady rate.

Even near the violent end, the massive objects move much more slowly than light speed.  The variation in their nearby field quickly smooths out to an oval and then a circle about the central point, which is why the calculated gravity field generates no spiral like the ones in the pretty pictures.

Oh, and those “gravity well” pictures?  They’re not showing gravitational fields, they’re really gravitational potential energy diagrams, showing how hard it’d be to get away from somewhere.  In the top video, for example, the satellite orbits the planet because it doesn’t have enough kinetic energy to get out of the well.  The more massive the attractor, the tighter it curves space around itself and the deeper the well.