“So if the Universe isn’t in a steady state and it’s not heading for a Big Crunch, I guess it’s getting bigger forever, huh?”

“Careful, Jeremy, the Universe expansion could maybe reach a stopping point if it happened to hold exactly the right amount of mass‑energy. The expansion could just stop when forces balance out.”

“What forces, Mr Moire? There’s gravity pulling everything together so what’s pushing them apart?”

“That is an excellent question, one that we don’t yet have an answer for. We’re about where Newton was with gravity. There was a lot of observational evidence, he had a name for it and knew how to calculate its effects, but he didn’t know how it worked. That’s us with Einstein’s Cosmological Constant.”

“Not any one object speeding up. Human lifetimes are too short to measure acceleration in galaxies a hundred thousand lightyears across. No, we use the same strategy that Hubble used — measure many galaxies at different distances from us and graph recession speed against distance. During the century since Hubble we’ve greatly improved our estimates of astronomical speeds and distances. Dividing the known speed of light into a galaxy’s measured distance tells us time since it emitted the photons we see. Our findings confirm Hubble’s general conclusion — on average, older photons come from galaxies that fly away faster. Hubble thought that the relation was linear but our fine‑tuned numbers show otherwise. The data says that after the first few seconds the Universe stretched at a steady rate for only the first ⅔ of its life. The stretch has been accelerating since then.”

“Why wasn’t it accelerating since the beginning? Did someone cut in the afterburner?”

“More like turned one off. The evidence and theory we have so far indicate the Universe has seen a succession of phases dominated by different processes. You’ve probably heard of inflation—”

“Have I? You should see what they want for a burger these days!”

“Not that sort of inflation, but I know how you feel. No, I’m referring to cosmic inflation, very early in the Big Bang sequence, when the Universe expanded by a factor of 1026 within a tiny fraction of a second. It was driven by enormously powerful radiation‑linked effects we don’t understand that finally ran out of steam and let lower‑energy processes take over.”

“We don’t know. The general principle is that one process so dominates what’s going on in a phase that nothing else matters, until for some reason it stops mattering and we’re in a new phase with a different dominant process. The early Universe was controlled by radiative processes until things cooled off enough for particles to form and persist. That changed the game. Gravity dominated the next 8 billion years. Particles clumped together, atoms then dust then solar systems into larger and larger structures with bigger spaces between them. About 5 billion years ago the game changed again.”

“So early on there weren’t even atoms, huh? Wow. What was the next game‑changer?”

“Thanks to Einstein and Friedmann’s work we’ve got at least a guess.”

“Alexander Friedmann. He was a Russian physicist, used Einstein’s General Relativity results to derive three equations that together model the dynamics of the overall scale of the Universe using just a few estimates for current conditions. His equations give acceleration as the difference of two terms. The positive term is simply proportional to Einstein’s Constant. The negative term depends on both average mass density and pressure. Take a moment to think.”

“Umm… Positive is acceleration, negative is deceleration, density and pressure go down … If the negative term gets smaller than the positive one, acceleration increases, right?”

“It does, and we think the constant term has been increasingly dominant for 5 billion years. Something else to consider — the equation’s result is in terms of scale change divided by current scale. What’s it mean if that ratio’s a positive constant?”

“I thought you’d recognize it. Einstein’s Constant implies the scale of the Universe grows at an exponentially accelerating rate. We’re now in the Cosmological Constant phase.” 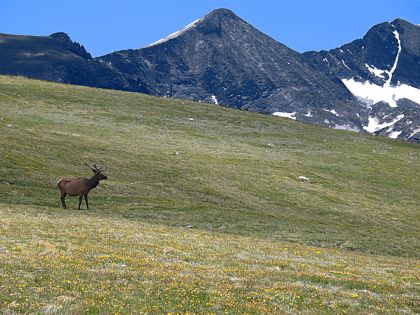 Change-me Charlie attacks his sign with a rag and a marker, rubbing out “Matter” and writing in “Energy.” Turns out his sign is a roll-up dry-erase display and he can update it on site. Cool. I guess with his rotating-topic strategy he needs that. “OK, maybe dark matter’s a thing, but dark energy ain’t. No evidence, someone just made that one up to get famous!”

And of course Physicist-in-training Newt comes back at him. “Lots of evidence. You know about the Universe expanding?”

“Prove it.” At least he’s consistent.

<sigh> “You know how no two snowflakes are exactly alike but they can come close? It applies to stars, too. Stars are fairly simple in a complicated way. If you tell me a star’s mass, age and how much iron it has, I can do a pretty good job of computing how bright it is, how hot it is, its past and future life history, all sort of things. As many stars as there are, we’re pretty much guaranteed that there’s a bunch of them with very similar fundamentals.”

“So when a star undergoes a major change like becoming a white dwarf or a neutron star or switching from hydrogen fusion to burning something else, any other star that has the same fundamentals will behave pretty much the same way. They’d all flare with about the same luminosity, pulsate with about the same frequency —”

“Yeah. I figured that happens with a sappy log where the heat gasifies a little sap then the spot cools off when outside air gets pulled in then the cycle goes again.”

“That could be how it works, depending. Anyhow, a star in the verge of mode change can go through the same kind of process — burn one kind of atom in the core until heat expansion pushes fuel up out of the fusion zone; that cools things down until fuel floods back in and off we go again. The point is, that kind of behavior isn’t unique to a single star. We’ve known about variable stars for two centuries, but it wasn’t until 1908 that Henrietta Swan Leavitt told us how to determine a particular kind of variable star’s luminosity from its pulsation frequency.”

“Edwin Hubble cared. Brightness dies off with the distance squared. If you compare the star’s intrinsic luminosity with how bright the star appears here on Earth, it’s simple to calculate how far away the star is. Hubble did that for a couple dozen galaxies and showed they had to be far outside the Milky Way. He plotted red-shift velocity data against those distances and found that the farther away a galaxy is from us, the faster it’s flying away even further.”

“A couple dozen galaxies ain’t much.”

“That was for starters. Since the 1930s we’ve built a whole series of ‘standard candles,’ different kinds of objects whose luminosities we can convert to distances out to 400 million lightyears. They all agree that the Universe is expanding.”

“Well, you gotta expect that, everything going ballistic from the Big Bang.”

“They don’t go the steady speed you’re thinking. As we got better at making really long-distance measurements, we learned that the expansion is accelerating.”

“Wait. I remember my high-school physics. If there’s an acceleration, there’s gotta be a force pushing it. Especially if it’s fighting the force of gravity.”

“Well there you go. Energy is force times distance and you’ve just identified dark energy. But standard candles aren’t the only kind of evidence.”

“Sure — ‘standard sirens‘ and ‘standard rulers.’ The sirens are events that generate gravitational waves we pick up with LIGO facilities. The shape and amplitude of the LIGO signals tell us how far away the source was — and that information is completely immune to electromagnetic distortions.”

“They’re objects, like spiral galaxies and intergalactic voids, that we have independent methods for connecting apparent size to distance.”

“And the candles and rulers and sirens all agree that acceleration and dark energy are real?”