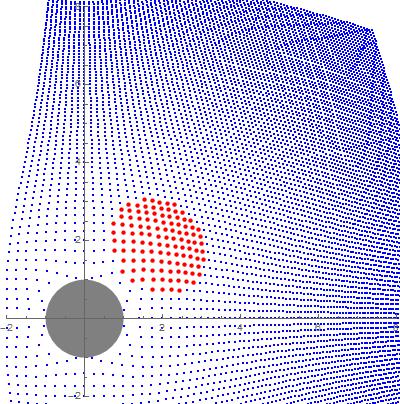 All cats are gray in the dark, and all lines are straight in one-dimensional space.  Sure, you can look at a garden hose and see curves (and kinks, dammit), but a short-sighted snail crawling along on it knows only forward and backward.  Without some 2D notion of sideways, the poor thing has no way to sense or cope with curvature.

Up here in 3D-land we can readily see the hose’s curved path through all three dimensions.  We can also see that the snail’s shell has two distinct curvatures in 3D-space — the tube has an oval cross-section and also spirals perpendicular to that.

But Einstein said that our 3D-space itself can have curvature.  Does mass somehow bend space through some extra dimension?  Can a gravity well be a funnel to … somewhere else?

No and no.  Mathematicians have come up with a dozen technically different kinds of curvature to fit different situations.  Most have to do with extrinsic non-straightness, apparent only from a higher dimension.  That’s us looking at the hose in 3D.

Einstein’s work centered on intrinsic curvature, dependent only upon properties that can be measured within an object’s “natural” set of dimensions. 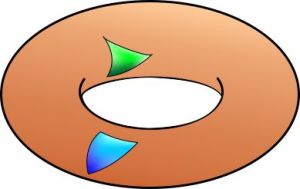 On a surface, for instance, you could draw a triangle using three straight lines.  If the figure’s interior angles sum up to exactly 180°, you’ve got a flat plane, zero intrinsic curvature.  On a sphere (“straight line” = “arc from a great circle”) or the outside rim of a doughnut, the sum is greater than 180° and the curvature is positive.

If there’s zero curvature and positive curvature, there’s gotta be negative curvature, right?  Right — you’ll get less-than-180° triangles on a Pringles chip or on the inside rim of a doughnut.

Some surfaces don’t have intersecting straight lines, but you can still classify their curvature by using a different criterion.  Visualize our snail gliding along the biggest “circle” he/she/it (with snails it’s complicated) can get to while tethered by a thread pinned to a point on the surface. Divide the circle’s circumference by the length of the thread.  If the ratio’s equal to 2π then the snail’s on flat ground.  If the ratio is bigger than 2π,  the critter’s on a saddle surface (negative curvature). If it’s smaller, then he/she/it has found positive curvature.

In a sense, we’re comparing the length of a periphery and a measure of what’s inside it.  That’s the sense in which Einsteinian space is curved — there are regions in which the area inside a circle (or the volume inside a sphere) is greater than or less than what would be expected from the size of its boundary.

Here’s an example.  The upper panel’s dotted grid represents a simple flat space being traversed by a “disk.”  See how the disk’s location has no effect on its size or shape.  As a result, dividing its circumference by its radius always gives you 2π.

In the bottom panel I’ve transformed* the picture to represent space in the neighborhood of a black hole (the gray circle is its Event Horizon) as seen from a distance.  Close-up, every row of dots would appear straight.  However, from afar the disk’s apparent size and shape depend on where it is relative to the BH.

By the way, the disk is NOT “falling” into the BH.  This is about the shape of space itself — there’s no gravitational attraction or distortion by tidal spaghettification.

Visually, the disk appears to ooze down one of those famous 3D parabolic funnels.  But it doesn’t — all of this activity takes place within the BH’s equatorial plane, a completely 2D place.  The equations generate that visual effect by distorting space and changing the local distance scale near our massive object.  This particular distortion generates positive curvature — at 90% through the video, the disk’s C/r ratio is about 2% less than 2π.

As I tell Museum visitors, “miles are shorter near a black hole.”

* – If you’re interested, here are the technical details.  A Schwarzchild BH, distances as multiples of the EH radius.  The disk (diameter 2.0) is depicted at successive time-free points in the BH equatorial plane.  The calculation uses Flamm’s paraboloid to convert each grid point’s local (r,φ) coordinates to (w,φ) to represent the spatial configuration as seen from r>>w.