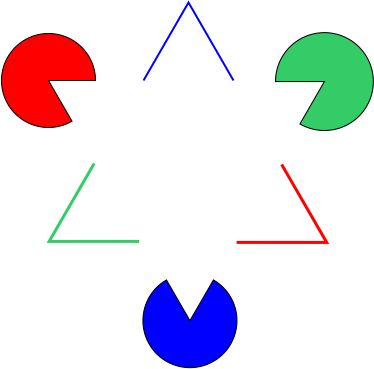 In this post I wrote, “gravitational force is how we we perceive spatial curvature.”
Here’s another claim — “Gravity is like centrifugal force, because they’re both fictitious.”   Outrageous, right?  I mean, I can feel gravity pulling down on me now.  How can it be fictional?

“Fictitious,” not “fictional,” and there’s a difference.  “Fictional” doesn’t exist, but a fictitious force is one that, to put it non-technically, depends on how you look at it.

Newton started it, of course.  From our 21st Century perspective, it’s hard to recognize the ground-breaking impact of his equation F=m·a.  Actually, it’s less a discovery than a set of definitions.  Its only term that can be measured directly is a, the acceleration, which Newton defined as any change from rest or constant-speed straight-line motion.  For instance, car buffs know that if a vehicle covers a half-mile (see comments) track in 60 seconds from a standing start, then its final speed is 60 mph (“zero to sixty in sixty”).  Furthermore, we can calculate that it achieved a sustained acceleration of 1.47 ft/sec2.

Both F and m, force and mass, were essentially invented by Newton and they’re defined in terms of each other.  Short of counting atoms (which Newton didn’t know about), the only routes to measuring a mass boil down to

Conversely, we evaluate a force by comparing it to a known force or by measuring its effect on a known mass.

Once the F=m·a. equation was on the table, whenever a physicist noticed an acceleration they were duty-bound to look for the corresponding force.  An arrow leaps from the bow?  Force stored as tension in the bowstring.  A lodestone deflects a compass needle?  Magnetic force.  Objects accelerate as they fall?  Newton identified that force, called it “gravity,” and showed how to calculate it and how to apply it to planets as well as apples.  It was Newton who pointed out that weight is a measure of gravity’s force on a given mass.

Incidentally, to this day the least accurately known physical constant is Newton’s G, the Universal Gravitational Constant in his equation F=G·m1·m2/r2.  We can “weigh” planets with respect to each other and to the Sun, but without an independently-determined accurate mass for some body in the Solar System we can only estimate G.  We’ll have a better value when we can see how much rocket fuel it takes to push an asteroid around.

But there are other accelerations that aren’t so easily accounted for.  Ever ride in a car going around a curve and find yourself almost flung out of your seat?  This little guy wasn’t wearing his seat belt and look what happened.  The car accelerated because changing direction is an acceleration due to a lateral force.  But the guy followed Newton’s First Law and just kept going in a straight line.  Did he accelerate?

This is one of those “depends on how you look at it” cases.  From a frame of reference locked to the car (arrows), he was accelerated outwards by a centrifugal force that wasn’t countered by centripetal force from his seat belt.  However, from an earthbound frame of reference he flew in a straight line and experienced no force at all. 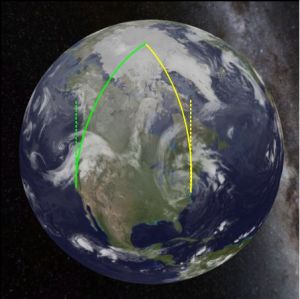 Suppose you’re investigating an object’s motion that appears to arise from a new force you’d like to dub “heterofugal.”  If you can find a different frame of reference (one not attached to the object) or otherwise explain the motion without invoking the “new force,” then heterofugalism is a fictitious force.

Centrifugal and centripetal forces are fictitious.  The  “force” “accelerating” one plane towards another as they both fly to the North Pole in this tale is actually geometrical and thus also fictitious   So is gravity.

In this post you’ll find a demonstration of gravity’s effect on the space around it.  Just as a sphere’s meridians give the effect of a fictitious lateral force as they draw together near its poles, the compressive curvature of space near a mass gives the effect of a force drawing other masses inward.