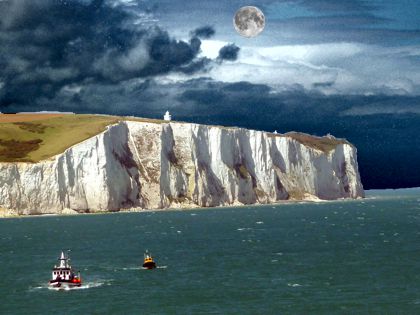 Cathleen’s talking faster near the end of the class. “OK, we’ve seen how Venus, Earth and Mars all formed in the same region of the protosolar disk and have similar overall compositions. We’ve accounted for differences in their trace gasses. So how come Earth’s nitrogen-oxygen atmosphere is so different from the CO2-nitrogen environments on Venus and Mars? Let’s brainstorm — shout out non-atmospheric ways that Earth is unique. I’ll record your list on Al’s whiteboard.”

“Wombats!” (That suggestion gets a glare from Cathleen. She doesn’t write it down.)

She registers the last one but puts parentheses around it. “This one’s literally a quickie — real-world proof that human activity affects the atmosphere. Since the 1900s gaseous halogen-carbon compounds have seen wide use as refrigerants and solvents. Lab-work shows that these halocarbons catalyze conversion of ozone to molecular oxygen. In the 1970s satellite data showed a steady decrease in the upper-atmosphere ozone that blocks dangerous solar UV light from reaching us on Earth’s surface. A 1987 international pact banned most halocarbon production. Since then we’ve seen upper-level ozone concentrations gradually recovering. That shows that things we do in quantity have an impact.”

“How about carbon dioxide and methane?”

“That’s a whole ‘nother topic we’ll get to some other day. Right now I want to stay on the Mars-Venus-Earth track. Every item on our list has been cited as a possible contributor to Earth’s atmospheric specialness. Which ones link together and how?”

Astronomer-in-training Jim volunteers. “The Moon has to come first. Moon-rock isotope data strongly implies it condensed from debris thrown out by a huge interplanetary collision that ripped away a lot of what was then Earth’s crust. Among other things that explains why the Moon’s density is in the range for silicates — only 60% of Earth’s density — and maybe even why Earth is more dense than Venus. Such a violent event would have boiled off whatever atmosphere we had at the time, so no surprise the atmosphere we have now doesn’t match our neighbors.”

Astrophysicist-in-training Newt Barnes takes it from there. “That could also account for why only Earth has plate tectonics. I ran the numbers once to see how the Moon’s volume matches up with the 70% of Earth’s surface that’s ocean. Assuming meteor impacts grew the Moon by 10% after it formed, I divided 90% of the Moon’s present volume by 70% of Earth’s surface area and got a depth of 28 miles. That’s nicely within the accepted 20-30 mile range for depth of Earth’s continental crust. It sure looks like our continental plates are what’s left of the Earth’s original crust, floating about on top of the metallic magma that Earth held onto.”

Jeremy gets excited. “And the oceans filled up what the continents couldn’t spread over.”

Al’s not letting go. “But why does Earth have so much water and why is it the only one of the three with a substantial magnetic field?”

Cathleen breaks in. “The geologists are still arguing about whether Earth’s surface water was delivered by billions of incoming meteorites or was expelled from deep subterranean sources. Everyone agrees, though, that our water is liquid because we’re in the Goldilocks zone. The water didn’t steam away as it probably did on Venus, or freeze below the surface as it may have on Mars. Why the magnetic field? That’s another ‘we’re still arguing‘ issue, but we do know that magnetic fields protect Earth and only Earth from incoming solar wind.”

“So we’re down to photosynthesis and … limestone?”

“Photosynthesis was critical. Somewhere around two billion years ago, Earth’s sea-borne life-forms developed a metabolic pathway that converted CO2 to oxygen. They’ve been running that engine ever since. If Earth ever did have CO2 like Venus has, green things ate most of it. Some of the oxygen went to oxidizing iron but a lot was left over for animals to breathe.”

“But what happened to the carbon? Wouldn’t life’s molecules just become CO2 again?” 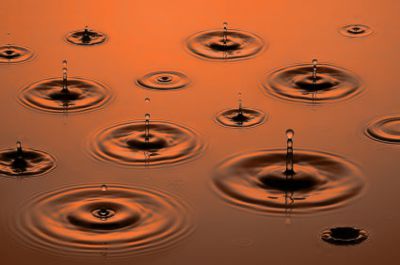 “Mars has the biggest volcanoes and all, like that canyon you can’t even see across.  Earth’s bigger than Mars, right?  How come we don’t have stuff like that?”

“Maybe we do but we’ve not found it yet.  Earth’s land area is only 4% greater than the surface area of Mars.  Our ocean floor and what’s beneath the Greenland and Antarctic ice sheets are like a whole second planet twice as big as the land we’ve explored so far.  Some people refer to the Mid-Atlantic Ridge as a 10000-mile-long volcano.  No-one knows for sure what-all else is down there.  Even on land we’ve probably had enormous landforms like Alba Mons but on the geologic timescale they don’t last long here.”

“Because of what we have that Mars doesn’t.  Massive forces of erosion — wind, water, Goldilocks temperatures — that grind down landforms something fierce.” 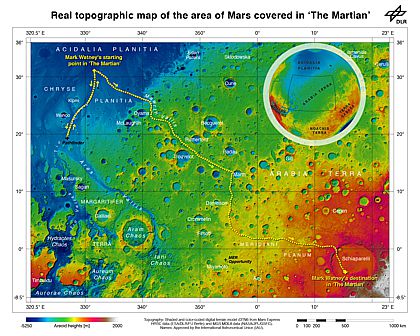 “Wait, Mars has winds.  What about those dust storms, and that windstorm that damn near destroyed Watney’s spaceship?”

“Um, Watney’s a fictional character.  The dust storms do exist, though —  one of them created a blackout that may have killed the Opportunity rover’s solar power.  But Martian dust grains are about the size of smoke particles.  Doesn’t take much of a wind to get those grains into the air and keep them there even in Martian atmosphere that’s only 1% as thick as Earth’s.  A 120-mph wind on Earth would blow you over, but one on Mars would just give you a gentle push.  Martian winds can barely roll a sand grain along the ground.  They definitely can’t sandblast a volcano like Earth winds can.  Which, by the way is why planetologists panned that storm scene in your The Martian movie.  Couldn’t happen.  The film production team admitted that.  The rest of the science was pretty good, though.”

“OK then, water.  You talking like dripping water can wear a hole in a rock?”

“More like water in quantity — glaciers carving off mountaintops and rivers digging canyons and ocean waves smashing shorelines to sandy powder.  Dripping water works, too — water’s corrosive enough even at low temperatures that it can dissolve most kinds of rock if you give it enough time.  But Mars has no glaciers or rivers or oceans.  Probably no dripping water, either”

“You were kidding about Goldilocks, right?  Talk about fictional characters!”

“Not in this case.  To planetologists, ‘Goldilocks’ is a technical term.  You know, ‘not too cold, not too warm…”

“Sorry, it’s Earth that has the Goldilocks magic, not Mars, and what’s just right is that we’re in the right temperature range for water to exist in gas and liquid and solid forms.  Mars’ surface is way too cold for liquid water.”

“Wait, I read that they’d found liquid water there.”

“Not on the surface.  The radar experiment aboard European Space Agency’s Mars Express spacecraft found an indication of liquid water, but it’s a kilometer below the surface.  Twenty kilometers wide, maybe a meter thick — more of a pond than the ‘lake’ the media were talking about.”

“Why should it make a difference that Earth’s Goldilocks-ish?  I mean, we’re comfortable but we’re not rocks.  What’s that got to do with the volcanoes?”

“Recycling, Mr Feder, recycling.  On Mars, if enough gaseous water molecules could get together to make rain, which they can’t, they’d freeze to the ground and stay there for a long, long time.  On Earth, though, most rain stays liquid and you get ground water or run-off which eventually evaporates and rains down again.  The same molecules get many, many chances to grind down a mountain.”

“But Earth water can freeze, too.”

“Remember we’re Goldilocks-ish.  Liquid water soaks into a cracked rock where it freezes, expands to pry off a chip or two, and thaws to freeze again.  Water’s freeze-thaw cycle can do a lot of damage if it gets to repeat often enough.”

“So Mars has big stuff because…”

“The planet’s too cold to wear it away.”

“Hmm…  How about ‘Goldilocks Zone and The Three Gazillion Bears’?”

“Gazillion?  Is that what kind of a bear they are?”

“No, that’s a number word.  It means ‘more than you could ever hope to count.’  Like a million but way way more.”

“But if you can’t count them, how do you know there are three times that many?”

“What’s different about them, and what do they do with water?  I bet they swim.”

“Why yes, they do.  In fact, they spend most of their time in water or at least being wet.  Another thing that’s special about them is that they’re tiny, about the size of the smallest dot you can see on your Mommy’s computer screen here.”

“If they’re so small, why are they called bears?”

“Take a look.  Doesn’t she look kind of like a nice bear?”

“She’s got just the right number for water bears.”

“Well, yes, but the picture’s kind of pretend and doesn’t show proper colors.  She’s so small she’s almost transparent.  She eats particles of algae and such, so maybe in real life she might be sort of green.”

“I like the way she’s smiling.  She reminds me of …  the fat man in the Laurel-n-Hardy movie you showed me last Saturday.”

“Oliver Hardy?  Yeah, I can see that.  Except the smiley bit is actually a wrinkle.  Her mouth is the round thing that looks like a nose.”

“That’s silly.  If her nose is her mouth how can she breathe?”

“Through her skin.  Animals can do that if they’re very small.”

“How else is she different?”

“Well, her kind’s one of Earth’s oldest animals.  Scientists have found water bear fossils over 500 million years old, twice as old as the oldest dinosaur.”

“But the big thing and the big puzzle is, they’re amazingly rugged little beasties.  They live all over the world — high on mountaintops, at the bottom of the sea, next to ice at the South Pole and next to boiling hot springs.  In experiments, water bears have survived doses of chemicals and radiation that would kill most other creatures.  Astronauts on the ISS even exposed dried-out water bears to the vacuum of space.  The little guys just got happy-active again when they were brought back inside and dunked in some water.”

“Why are they so tough?  They make special molecules that protect them against dehydration and radiation and toxins even though they live in wet environments that don’t get irradiated and rarely get poisoned.  Fish and insects that evolved in lightless caves stopped using energy to make eyes they don’t need.  Why or even how have water bears held onto all that specialized protective DNA for hundreds of millions of years?”

“Does anybody know the answer?”

“Nope.  Some people have guessed that because water bears can survive exposure to space, maybe they came to Earth from another planet somewhere.  Maybe some advanced civilization sprayed water bears out into the Universe to spread life around.  Doesn’t that sound spooky?” 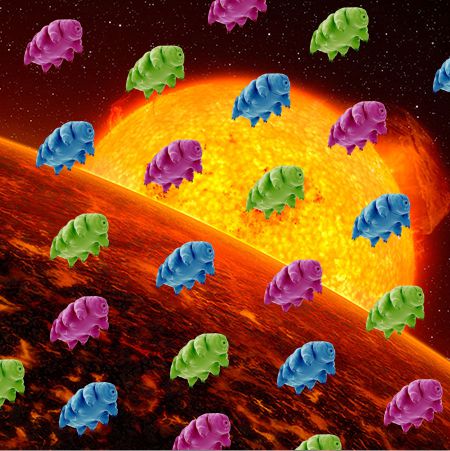