I’ve liked 4s and 6s ever since when, but lately 3s and 7s have been cropping up.  A lot.  And they have a really weird connection with 2016.

For me New Year has always been an opportunity to inspect the upcoming year’s number for interesting properties.

Maybe the easiest way for a number to be interesting is to be prime, that is, not divisible by anything other than itself and one.  My Uncle Harold once proved to me that all odd numbers are prime.

“One’s a prime, and so are three and five.  How about seven?  Seven’s prime.  Nine?  Not a prime but we can throw that one out as experimental error.  Eleven?  Prime.  Thirteen?  Prime.  Case closed.”

They use that logic a lot in politics nowadays.

There are a few prime-ity tests that just need a quick glance.  Take 2015 for example.  Ends with a “5” so it’s got to be divisible by five.  Not a prime.  A number ending with a “0” is like ending with twice five so it’s not prime either.

Remember Party Like It’s 1999 (prime)?  Very popular when the Artist Then Known As Prince produced it in 1982 (not a prime).  Unfortunately, we who were working on Y2K projects were too busy to party that year so we couldn’t celebrate 1999 being prime until it was all over.

If 2016 won’t be a prime year, is there another way it can be special?  Hmmm…  2016 isn’t a perfect square, nor is it the sum of two squares.  Neither its square nor its cube are particularly noteworthy, but the square PLUS the cube is kinda cute: their sum is 8,197,604,352 which contains every digit just once.

According to The On-Line Encyclopedia of Integer Sequences, 2016 is a hexagonal number.  Start with a dot.  Make that dot one corner of a hexagon of dots.  Then add a hexagon around that, one more dot per side,  keeping the original dot as a corner (like the plan for a starter motte-and-bailey castle)…

Keep going until the outermost hexagon has 32 dots along each edge.  All the hexagons together will have exactly 2016 dots.

The OEIS says that 2016 is a participant in at least 925 more special sequences, so I guess it’s a pretty cool number after all.

My nominee for Puzzle King of The World is my good friend Jimmy.  I challenged him once to find the connection between 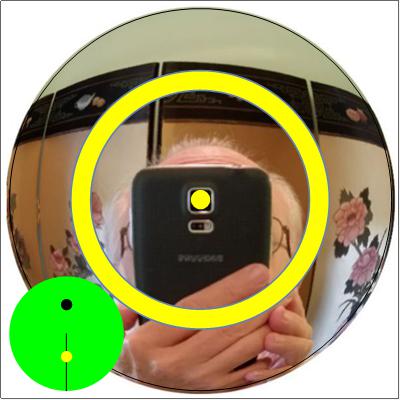 We often read “singularity” and “black hole” in the same pop-science article.  But singularities are a lot more common and closer to us than you might think. That shiny ball hanging on the Christmas tree over there, for instance.  I wondered what it might look like from the inside.  I got a surprise when I built a mathematical model of it.

To get something I could model, I chose a simple case.  (Physicists love to do that.  Einstein said, “You should make things as simple as possible, but no simpler.”)

I imagined that somehow I was inside the ball and that I had suspended a tiny LED somewhere along the axis opposite me.  Here’s a sketch of a vertical slice through the ball, and let’s begin on the left half of the diagram…

I’m up there near the top, taking a picture with my phone.

To start with, we’ll put the LED (that yellow disk) at position A on the line running from top to bottom through the ball.  The blue lines trace the light path from the LED to me within this slice.

The inside of the ball is a mirror.  Whether flat or curved, the rule for every mirror is “The angle of reflection equals the angle of incidence.”  That’s how fun-house mirrors work.  You can see that the two solid blue lines form equal angles with the line tangent to the ball.  There’s no other point on this half-circle where the A-to-me route meets that equal-angle condition.  That’s why the blue line is the only path the light can take.  I’d see only one point of yellow light in that slice.

But the ball has a circular cross-section, like the Earth.  There’s a slice and a blue path for every longitude, all 360o of them and lots more in between.  Every slice shows me one point of yellow light, all at the same height.  The points all join together as a complete ring of light partway down the ball.  I’ve labeled it the “A-ring.”

Now imagine the ball moving upward to position B.  The equal-angles rule still holds, which puts the image of B in the mirror further down in the ball.  That’s shown by the red-lined light path and the labeled B-ring.

So far, so good — as the LED moves upward, I see a ring of decreasing size.  The surprise comes when the LED reaches C, the center of the ball.  On the basis of past behavior, I’d expect just a point of light at the very bottom of the ball (where it’d be on the other side of the LED and therefore hidden from me).

Nup, doesn’t happen.  Here’s the simulation.  The small yellow disk is the LED, the ring is the LED’s reflected image, the inset green circle shows the position of the LED (yellow) and the camera (black), and that’s me in the background, taking the picture…

The entire surface suddenly fills with light — BLOOIE! — when the LED is exactly at the ball’s center.  Why does that happen?  Scroll back up and look at the right-hand half of the diagram.  When the ball is exactly at C, every outgoing ray of light in any direction bounces directly back where it came from.  And keeps on going, and going and going.  That weird display can only happen exactly at the center, the ball’s optical singularity, that special point where behavior is drastically different from what you’d expect as you approach it.

So that’s using geometry to identify a singularity.  When I built the model* that generated the video I had to do some fun algebra and trig.  In the process I encountered a deeper and more general way to identify singularities.

* – By the way, here’s a shout-out to Mathematica®, the Wolfram Research company’s software package that I used to build the model and create the video.  The product is huge and loaded with mysterious special-purpose tools, pretty much like one of those monster pocket knives you can’t really fit into a pocket.  But like that contraption, this software lets you do amazing things once you figure out how.