Anne’s an experienced adventurer, but almost exploding the Earth when she tried transporting herself into an anti‑Universe was a jolt. It takes her a while to calm down. Fortunately, I’m there to help. <long soothing pause> “Sy, I promise that’s one direction I’ll never ‘push’ to go again.”

“No reason to go there and big reasons not to. <long friendly pause> Hmm. You’ve told me that when you use your superpower to go somewhere, you can feel whether there’d be a wall or something in the way. That’s how you know to get to a safer location before you ‘push.’ Didn’t you get that feeling before you went to meet anti‑Anne?”

“I’m curious. Could you feel for just a second in the direction opposite to anti‑Anne? For Heaven sake don’t go there! Just look, OK?”

“All right … <shiver> Now, that’s weird. There’s nothing there, except there’s not even a there there, if you know what I mean.”

“I think I do, and you’ve just given us one more clue to where you almost went. Whoa, no more shivering, you’re back here safe where there’s normal matter and real locations, OK? <another soothing pause> That’s better. So, I was assuming a binary situation, an anti‑Universe obeying a Charge‑Parity‑Time symmetry that’s exactly the reverse of ours. The math allows only the two possibilities. You observed ‘no there there’ when you tried for a third option. That’s support for the assumption.”

“How could we have even two Universes?”

“It goes back to the high‑energy turmoil at the Big Bang’s singularity. Symmetry says the chaos in the singularity should have generated as many anti‑atoms, umm, as many positrons and anti‑protons, as their normal equivalents.”

“Anti‑electrons. Long story. The big puzzle is, where did those anti‑guys go? One proposal that’s been floating around is that while normal matter and our normal CPT symmetry expanded from the singularity to make our Universe, the anti‑matter and reversed symmetry expanded in some kind of opposite direction to make the anti‑Universe. You may have found that direction. Here, I’ll do a quick sketch on Old Reliable.”

“Looks like some of the banged‑up painted‑up battle shields I saw a thousand years ago.”

“It does, a little. Over on the top left is our normal‑matter Universe with galaxies and all, expanding out of the singularity at time zero. Time runs vertically upward from that point. I can’t draw three spatial dimensions so just one expanding sideways will have to do, OK?”

“No problem, I do x‑y‑z‑t thinking all the time when I use my superpower.”

“Of course you do. Well, coming down out of the singularity into minus‑time we’ve got the anti‑Universe. I’ve reversed the color scheme because why not, although I expect their colors would look exactly like ours because we know that photons are their own anti‑particles and should behave the same in both Universes.”

“They do. Anti‑Anne looked just like me, white satin and all.”

“Mmm, yeah, but we only call them minus and plus because we’re standing outside of both of them. Looking from the inside, I’d say time in each increases towards expansion.”

“Good insight, you’re way ahead of me. That’s what I’ve drawn on the right side of the sketch. The two are perfectly equivalent except for CPT and anti‑CPT. Time direction, x‑y‑z space directions, even spin orientation, can all be made parallel between the two. However, the charges are reversed. Anti‑Anne’s atoms have positrons where we have electrons, negative anti‑protons where we have positive protons. When anti‑matter meets matter, there’s massive energy release from equivalent charged particles neutralizing each other.”

“Wait. Gravity. Wouldn’t anti‑matter particles repel each other? Your picture has galaxies and they couldn’t grow up with everything backwards.”

“Nope, you’re carrying this model too far. The only thing that’s reversed is charge. Masses work the same in each symmetry. Gravity pays attention to mass, not charge, and it’s always a force of attraction.”

“Anyway, not going back there.”

That white satin dress, that molten‑silver voice. “Anne? Is that you? Are you OK?”

“What happened? Where’ve you been all year? Or considering it’s you I should ask, when’ve you been?”

“You know the line between history and archaeology?”

“Whether or not there was writing?”

“Sort of. Anyway, I’ve crossed it dozens of times. You wouldn’t believe some of the things I’ve seen. The professionals sure wouldn’t.”

“Wait, does the dress go with you? White satin wasn’t a thing centuries ago.”

“Oh, it changes like camouflage when I travel. That’s one reason I like this era — white satin’s so much nicer than muddy homespun or deerskins, mmm?”

“Mm‑hmmm. I suppose that’s why the dress didn’t get messed up when you erupted here. What led to that, anyway?”

“I don’t know. It probably had something to do with me experimenting with my ‘pushing’ superpower, going for a direction I hadn’t tried before. I’ve always known that front‑and‑back ‘pushing’ moves me forward or backward in time. You helped me understand that a ‘push’ to the side shifts me between alternate Universes at different probability levels. ‘Pushing’ up or down changes my size. Well, this morning I figured out a different direction to ‘push’ and that was weird.”

“You’ve described all three normal directions of space, so a new one would have to be weird.”

“I know what that direction feels like even if I can’t describe it. What was weird is what happened when I tried ‘pushing’ there. Things came into focus a little slowly. That may be what saved me. What I saw in front of me was … me. Dress, hair, everything, reflected left‑to‑right like looking in a mirror but our movements were a little different. Things were sharpening up and suddenly this sheet of fire flared between us and it blew me … here, to your office. What was all that about, Sy?”

“A couple of questions first. That sheet of fire — did it have a color or was it pure white?”

“Not white, more of a bright blue-violet.”

“And did it start like <snap> or were there preliminary sparkles?”

“Umm .. yes, there were sparkles! In fact I was already ‘pushing’ away when the bad flare‑up started. How did you know?”

“Just following a train of thought. I’m hypothesizing here, but I think you just barely escaped blowing the Earth apart.”

“It all goes back to the Big Bang and our belief that physical phenomena have fundamental symmetries. Back in the Universe’s first few skillionths of a second the energy density was so high that the electromagnetic and nuclear forces were symmetry‑related. Any twitch in the chaotic unified force field was equally likely to become a proton or an anti‑proton, matter or anti‑matter. So why is anti‑matter so rare in our Universe?”

“Maybe the matter atoms just wiped out all the anti‑matter.”

“Uh‑uh. By symmetry, there should have been exactly as much of each sort. If the wipe‑out had happened there wouldn’t have been enough matter left over to make a single galaxy, much less billions of them. But here we are. Explaining that is one of the biggest challenges in cosmology.”

“I wouldn’t say ‘sacred‘ but the most accurate physical theory we know of is based on the product of Charge, Parity and Time symmetries being constant in our Universe. If you take a normal atom and somehow reverse both its charge and spin to get an anti‑matter atom, the symmetries say that the reversed atom must travel backward in time. From an outsider’s perspective it’d be like the original atom and the anti‑atom rush together, annihilate each other and release the enormous amount of energy that accomplished the reversal. Anne, I think you almost ‘pushed’ yourself into an anti‑Universe with a reversed CPT symmetry.”

“…were atoms from the air you carried with you, colliding with anti‑atoms in your anti‑twin’s air. Good thing those micro‑collisions released enough energy to get you back here before…”

“…I touched anti‑Anne or even breathed! <shiver> That would have been…” 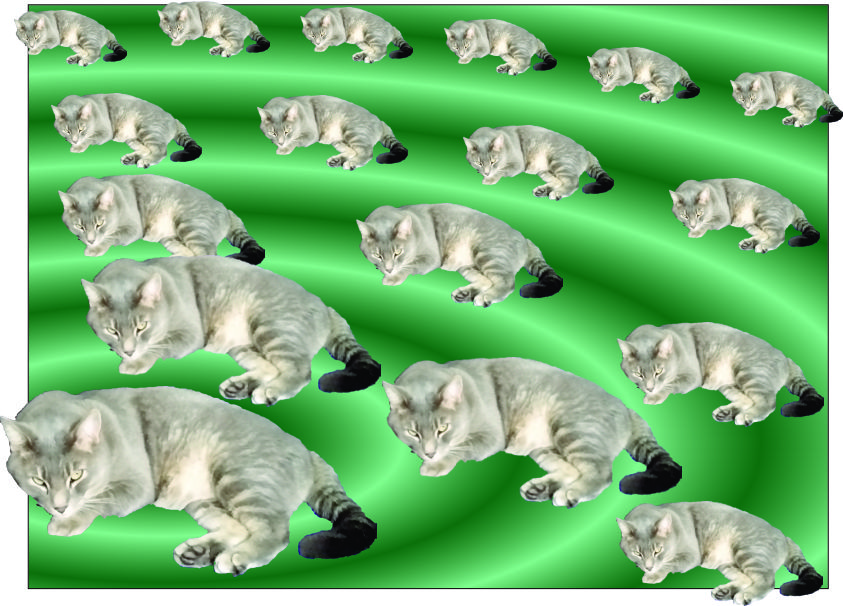 Cathleen takes back control of the conference software. “Thanks, Jim. OK, the final contestant in our online Crazy Theories contest is the winner of our last face-to-face event where she told us why Spock and horseshoe crabs both have green blood. You’re up, Amanda.”

“Thanks, and hello out there. I can’t believe Jim and I are both talking about parallel universes. It’s almost like we’re thinking in parallel, right?”

<Jim’s mic is muted so he makes gagging motions>

“We need some prep work before I can talk about the Multiverse. I’m gonna start with this heat map of North America at a particular time. Hot in the Texas panhandle, cool in British Columbia, no surprise. You can do a lot with a heat map — pick a latitude and longitude, it tells you the relative temperature. Do some arithmetic on the all numbers and you can get average temperature, highs and lows, front strength in degrees per mile, lots of stuff like that.

“You build this kind of map by doing a lot of individual measurements. If you’re lucky you can summarize those measurements with a function, a compact mathematical expression that does the same job — pick a latitude and longitude, it tells you the value. Three nice things about functions — they take up a lot less space than a map, you can use straightforward mathematical operations on them so getting statistics is less work than with a map, and you can form superpositions by adding functions together.”

Cathleen interrupts. “Amanda, there’s a question in the chat box. ‘Can you give an example of superposition?’“

“Sure. You can superpose simple sine‑wave functions to describe chords for sound waves or blended colors for light waves, for instance.

“Many researchers say the quantum values are relative probabilities for observing different results in an experiment — but most of them carefully avoid worrying about why the answers aren’t always the same. Einstein wanted to know what Bohr was averaging over to get his averages. Bohr said it doesn’t matter, the percentages are the only things we can know about the system and it’s useless to speculate further.

“Remember Schrödinger’s catbox with two possible experimental results? Everett would say that his universal quantum function contains a superposition of two component sub-functions — happy Schrödinger with a live kitty and sad Schrödinger with a disposal problem. Each Schrödinger would be quite certain that he’d seen the definite result of a purely random operation. Two Schrödingers in parallel universes going forward.

“But in fact there’d be way more than two. When Schrödinger’s eye absorbs a photon, or maybe doesn’t, that generates another pair of universes. So do the quantum events that occur as his nerve cells fire, or don’t. Each Schrödinger moves into the future embedded in a dense bundle of parallel universes.”

Cathleen interrupts. “Another question. ‘What about conservation of mass?‘”

“Good question, whoever asked that. Everett doesn’t address that explicitly in his thesis, but I think he assumed the usual superposition math. That always includes a fix‑up step so that the sum of all the pieces adds up to unity. Half a Schrödinger mass on one track and half on the other. Even as each of them splits again and again and again the total is still only one Schrödinger‑mass. There’s other interpretation — each Schrödinger’s universe would be independent of the others so there’s no summing‑up to generate a conservation‑of‑mass problem. Your choice.

“Everett traded quantum weirdness for a weird Universe. Not much of a trade-off, I think.”