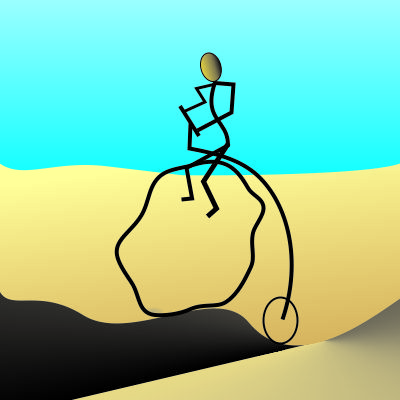 <Note to reader — Doing a little Spring cleaning. Here’s a collection of short takes to lighten your mood in these trying times…>

A baffled young student of Chemistry
Got their enthalpy mixed with their entropy.
”Thy’re surely confusing me
And evilly abusing me
With their Gibbs and their Helmholz free energy.”

Elliptical definitions are even less informative than circular definitions. That’s why politicians prefer them.

There’s an old and well-established (but good-natured) rivalry between major segments of humanity’s Science enterprise. A Mathematician might proclaim that

Statistics are what we used before we had computer graphics.

Paleontologists have announced the discovery of a previously unknown fossil homid, Homo eructus, also known as “Spitting Man.” The body had been interred along with a copious supply of status goods — shell and polished-stone necklaces, a blade weapon, etc., but also unexpectedly numerous containers of chewing tobacco and a tin cup, hence the species name.

I’d like to thank whoever thought up this call-and-response…
WHAT DO WE WANT?
TIME TRAVEL!
WHEN DO WE WANT IT?
IT DOESN’T MATTER!

One friend says that coconuts are mammals because they have fur and give milk. Another friend maintains that they’re shellfish. She writes, “Wikipedia says shellfish are ‘exoskeleton-bearing aquatic invertebrates used as food‘. Their husk is the exoskeleton, they’re obviously invertebrates because they have no spine, and they’re aquatic when floating in water or blended into cocktails.”

If the human body is the result of Intelligent Design, how come it’s impossible to reach that itchy spot in the middle of one’s back?

Combining my physics studies and my observations as a museum docent I’ve concluded that there are three ultimate speeds in the Universe
* the speed of sound
* the speed of light
* the speed of a toddler when your back is turned.

The letter “A” is common in English, but you can count from zero to nine-hundred ninety-nine without encountering an “A“. On the other hand, the letter “Z” is uncommon but in Zero it’s at the head of the number line. If you want to cover something from A to Z, you have to count backwards.

Speaking of “Z,” “zero” is the only formal number word that contains a “z.” “Zillion” and “bazillion” don’t count.

I had a really good walk-off line, but that was at 3:00 am and it’s gone.
Dang, I hate it when that happens.
Don’t forget to tip the wait staff.