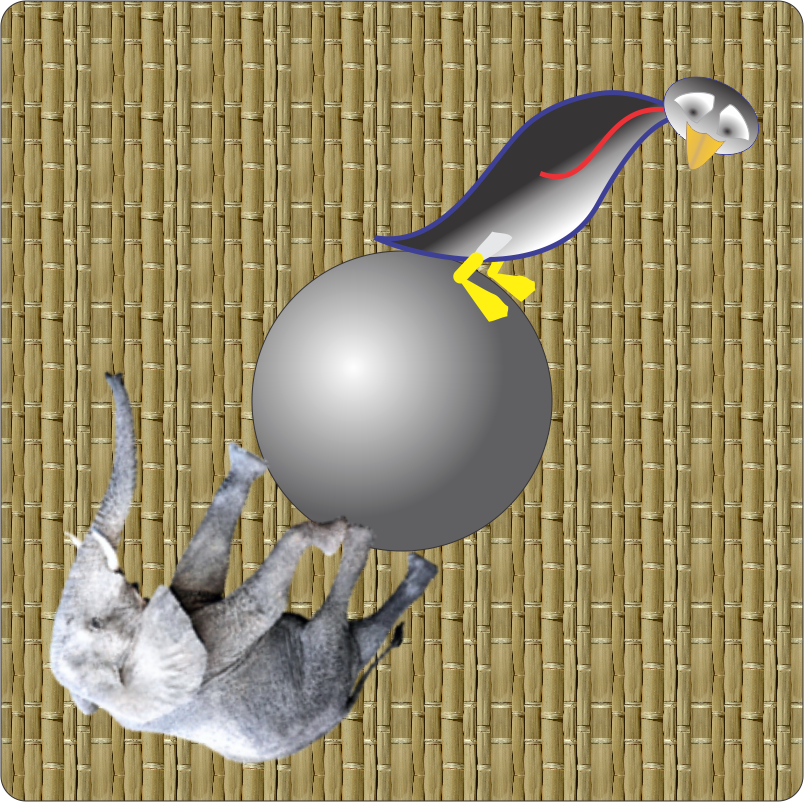 (a hat-tip to Mo Willems, whose Elephant and Piggy books helped my grandkids discover reading)

“Hey, Sy, how come my magnetized nail’s hysteresis loop is so wide? It makes sense that the end‑case magnetizing happens because all the iron atoms get lined up in one direction or the other. But why ain’t the blue up‑curve right on top of the down‑curve?”

“Why do you think it should be, Vinnie?”

“Well, the red curve’s different because you got the outside field herding the iron atoms into domains where they all point the same way and that makes the nail’s magnetism grow from zero, and then the domains that agree with the outside magnetic field eat up the other domains until like I said they saturate. But on both sides of the blue loop the domains already exist, right, so the herding’s all done. Up or down it’s only domains growing and shrinking. Seems to me that the curves oughta be the same.”

“They are, near as I could draw them. You’re just not looking at them right. Rotate it 180°, see how they match up.”

“You picked up that the vertical axis represents strength and direction, but you missed that the horizontal axis also represents strength and direction. Neither axis starts at zero, they’re both centered on zero. The driver is the outside magnetic field. No strength in the middle, increasing north‑bound strength to the right, south‑bound strength to the left. Start at the head‑end‑north corner and go down branch 2. The north‑bound driver strength decreases. That relaxes some of those north‑pointing domains and the nail’s net magnetism decreases just a bit. When the outside field’s strength gets down to neutral, about at the upper arrow, the nail’s still strongly magnetized. Most of the domains remember which way they were pointing. That’s the history that makes this hysteresis. The domains stay there until the outside field gets strong enough south‑bound to make a difference. That grows the south‑bound domains at the expense of northbound ones. All that goes on until we get to saturation at head‑end‑south corner and then we run exactly the reverse sequence. For most materials, the two extreme fields have the same strength, just opposite directions.”

“Wait, you said ‘for most materials.’ Different materials have different widths on that picture?”

“Good catch. Yes, there’s ‘hard‘ ones like rare earth magnets. They have a really wide hysteresis loop you can’t demagnetize without a really strong field. That’s good for where you want a permanent magnet that you don’t want to have to recalibrate, like on a spacecraft bound for Jupiter. You’d want a ‘soft magnet‘ with a narrow hysteresis loop for something like a transformer core that has to switch polarity sixty times a second.”

<longish contemplative silence> “Sy, I just got a great idea! And it uses that entropy elephant stuff you wrote about.”

“OK. When the nail is magnetized, it’s got all or at least most of its iron atoms pointing in the same direction, right? And when the outside field demagnetizes it, the atoms point all over the place, right? So the not‑magnetized nail has randomness, that’s entropy, and the magnetized one doesn’t. Where did the entropy come from? Gotta be from the outside, right? Can we use this to like suck entropy out of things?”

“Right, right and sorta right. I’m not happy with the idea of pumping entropy around. What’s really in play is energy, sometimes as magnetic field energy and sometimes as heat. You’ve got the core idea for a magnetic refrigerator. Put a field‑magnetized transfer material in contact with what you want to cool, then turn off the outside field. Heat from the target flows into the material, jiggles the atoms and scrambles the magnetization. Break the contact, cool and re‑magnetize the material and repeat. The idea’s been around since the late 1800s. The problem has been finding the right material to make it work. The best stuff has a tall, narrow hysteresis loop so it can be strongly magnetized yet forget it easily. Researchers have finally found some good candidates.”