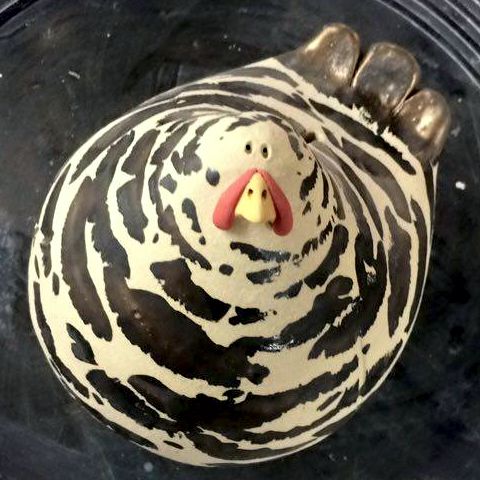 It started with the Babylonians.  The Greeks abhorred the notion.  The Egyptians and Romans couldn’t have gotten along without it. Only 1600 years later did Newton gave final polishing to … The Method of Successive Approximations.

Stay with me, we’ll get to The Chicken soon.

Scientists and engineers tackle a complex problem piecewise.  Start by looking for a simple problem you know how to solve. Adjust that solution little by little to account for the ways in which the real system differs from the simple case.  Successive Approximation is only one of many adjustment strategies invented over the centuries.

The most widely-used technique is called Perturbation Theory (which has nothing to do with the ways kids find to get on their parents’ nerves).  The strategy is to find some single parameter, maybe a ratio of two masses or the relative strength of a particle-particle interaction.  For a realistic solution, it’s important that the parameter’s value be small compared to other quantities in the problem.

Simplify the original problem by keeping that parameter in the equations but assume that it’s zero.  When you’ve found a solution to that problem, you “perturb” the solution — you see what happens to the model when you allow the parameter to be non-zero.

There’s an old story, famous among physicists and engineers, about an association of farmers who wanted to design an optimum chicken-raising operation.  Maybe with an optimal chicken house they could heat the place with the birds’ own body heat, things like that.  They called in an engineering consultant.  He looked around some running farms, took lots of measurements, and went away to compute.  A couple of weeks later he came back, with slides.  (I told you it’s an old story.)  He started to walk the group though his logic, but he lost them when he opened his pitch with, “Assume a spherical chicken…”

Now, he may actually have been on the right track.  It’s a known fact that many biological processes (digestion, metabolism, drug dosage, etc.) depend on an organism’s surface area.  A chicken’s surface area could be key to calculating her heat production.  But chickens (for example, our charming Henrietta) have a complicated shape with a poorly-defined surface area.  The engineer’s approximation strategy must have been to estimate each bird as a sphere with a tweakable perturbation parameter reflecting how spherical they aren’t.

Then, of course, he’d have to apply a second adjustment for feathers, but I digress.

Now here’s the thing.  In quantum mechanics there’s only a half-dozen generic systems with exact solutions qualifying them to be “simple” Perturbation Theory starters.  Johnny’s beloved Particle In A Box (coming next week) is one of them.  The others all depend in similar logic — the particle (there’s always only one of them) is confined to a region which contains places where the particle’s not allowed to be. (There’s one exception: the Free Particle has no boundaries and therefore is evenly smeared across the Universe.)

Virtually all other quantum-based results — multi-electron atoms, molecular structures, Feynman diagrams for sub-atomic physics, string theories, whatever — depend on Perturbation Theory.  (The exceptions are topology and group-theory techniques that generally attempt to produce qualitative rather quantitative predictions.)  They need those tweakable parameters.

In quantum-chemical calculations the perturbation parameters are generally reasonably small or at least controllable.  That’s not true for many of the other areas.  This issue is especially problematic for string theory.  In many of its proposed problem solutions no-one knows whether a first-, second- or higher-level approximation even exists, much less whether it would produce reasonable predictions.

I find that perturbing.