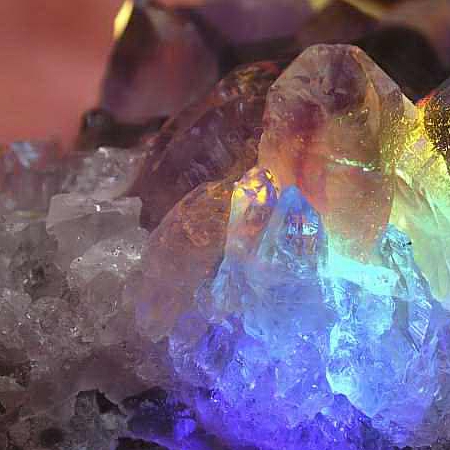 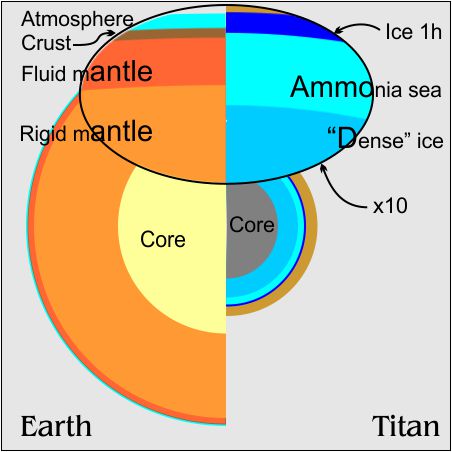 This week we dip a little deeper into Titan’s weirdness trove.  Check the diagram.  Two kinds of ice??!?  What’s that about?

As everyone knows, diamonds and pencil lead (graphite, and I loved learning that graphite is an actual dug-from-the-ground mineral whose name came from the Greek verb “to write”) are both pure carbon, mostly.  Same atoms, just arranged differently.

Graphite‘s carbon atoms are laid out in sheets of hexagons.  Adjacent sheets are bonded together but not as strongly as are the atoms within each sheet.  Sheets can slide past each other, which is why we use graphite as a lubricant and why pencils can write and erasers can unwrite.

Diamond‘s atoms are also laid out in sheets of (rumpled) hexagons, but now the bonds between sheets are identical to the bonds within a sheet.  Turn your head sideways and you’ll see that sheets run vertical, too.  In fact, each carbon atom participates in four sheets, three vertical and one horizontal.  All that symmetrical bonding makes diamond one of the hardest substances we know of.

Neighboring carbon atoms form bonds by sharing electrons between their positive nuclei.  Neighboring water molecules (H2O) don’t share electrons but they do tend to line up with their somewhat positive hydrogen atoms pointing towards nearby somewhat negative oxygens.  That’s a loose rule in liquid water but it dominates when the molecules freeze into ice.

Most of the ice on Earth has an Ice-Ih structure, where the oxygen atoms are arranged in the same pattern as the carbons are in graphite.  Water’s hexagonal sheets aren’t quite flat, but the 6-fold symmetry gives us snowflakes.  There’s a hydrogen atom between each pair of oxygens, but it’s not half-way between.  Instead, each oxygen tightly holds its own two hydrogens while it pulls at further-away hydrogens owned by two neighboring oxygens.

But water molecules have other ways to arrange themselves.  A small fraction of Earth’s ice has a diamond-like Ice-Ic structure with each oxygen participating in four hexagon sheets.  Again, hydrogens are on the lines between them.

Water’s such a versatile molecule that it doesn’t stop with two polymorphs.  Ice scientists recognize seventeen distinct crystalline varieties, plus three where the molecules don’t line up neatly.  (None of them is Vonnegut’s “Ice-nine.”)  Each polymorph exists in a  unique temperature and pressure range; each has its own set of properties.  As you might expect, ices formed at high pressure are denser than liquid water.  Fortunately, Ice-Ih is lighter than water and so ice cubes and icebergs float.

As cold as Titan is and as high as the pressure must be under 180 miles of Ice-Ih and watery ammonia sea (even at 10% of Earth’s gravity), it’s quite likely* that there’s a thick layer of Ice-something around Titan’s rocky core. 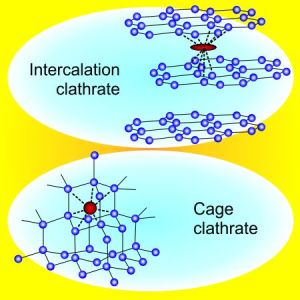 The primary reason we think Titan is so wet is that Titan’s density is about halfway between rock and water.  We know there are other light molecules on Titan — ammonia, methane, etc.  We don’t know how much of each.  Those compounds don’t have water’s complex phase behavior but many can dissolve in it.  That’s why that hypothetical “Ammonia sea” is in the top diagram.

But wait, there’s more.  Both graphite and water ice are known to form complex polymorphs, clathrates, that host other molecules.  This diagram gives a hint of how that can happen.  Frozen water under pressure forms a large number of more-or-less ordered cage clathrate structures that can host  Titan’s molecular multitude.

At Titan’s temperatures ice rocks would be about as hard as granite.  Undoubtedly they’ll have surprising chemistry and interesting histories.  We can expect clathrate geology on Titan to be as complex as silicate geology is on Earth.

Geochemist heaven, except for the space suits.

* – A caveat: we know a great deal about Earth’s structure because we live here and have been studying it scientifically for centuries. On the other hand, most of what we think we know about Titan’s interior comes from mathematical models based on gravitational observations from the Cassini mission, plus 350 photos relayed back from the Huygens lander, plus experiments in Earth-bound chemistry labs. Expect revisions on some of this stuff as we learn more.