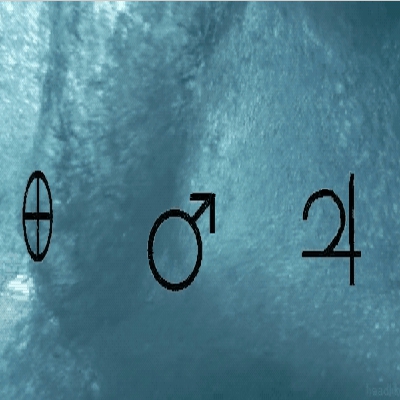 Things were simpler in the pre-Enlightenment days when we only five planets to keep track of.  But Haley realized that comets could have orbits, Herschel discovered Uranus, and Galle (with Le Verrier’s guidance) found Neptune.  Then a host of other astronomers detected Ceres and a host of other asteroids, and Tombaugh observed Pluto in 1930.

Astronomers relished the proliferation — every new-found object up there was a new test case for challenging one or another competing theory.

Here’s the currently accepted narrative…  Long ago but quite close-by, there was a cloud of dust in the Milky Way galaxy.  Random motion within it produced a swirl that grew into a vortex dozens of lightyears long.

Consider one dust particle (we’ll call it Isaac) afloat in a slice perpendicular to the vortex.  Assume for the moment that the vortex is perfectly straight, the dust is evenly spread across it, and all particles have the same mass.  Isaac is subject to two influences — gravitational and rotational.

Gravity pulls Isaac towards towards every other particle in the slice.  Except for very near the slice’s center there are generally more particles (and thus more mass) toward and beyond the center than back toward the edge behind him.  Furthermore, there will generally be as many particles to Isaac’s left as to his right.  Gravity’s net effect is to pull Isaac toward the vortex center.

But the vortex spins.  Isaac and his cohorts have angular momentum, which is like straight-line momentum except you’re rotating about a center.  Both of them are conserved quantities — you can only get rid of either kind of momentum by passing it along to something else.  Angular momentum keeps Isaac rotating within the plane of his slice.

An object’s angular momentum is its linear momentum multiplied by its distance from the center.  If Isaac drifts towards the slice’s center (radial distance decreases), either he speeds up to compensate or he transfers angular momentum to other particles by colliding with them.

But vortices are rarely perfectly straight.  Moreover, the galactic-cloud kind are generally lumpy and composed of different-sized particles.  Suppose our vortex gets kinked by passing a star or a magnetic field or even another vortex.  Between-slice gravity near the kink shifts mass kinkward and unbalances the slices to form a lump (see the diagram).  The lump’s concentrated mass in turn attracts particles from adjacent slices in a viscous cycle (pun intended).

After a while the lumpward drift depletes the whole neighborhood near the kink.  The vortex becomes host to a solar nebula, a concentrated disk of dust whirling about its center because even when you come in from a different slice, you’ve still got your angular momentum.  When gravity smacks together Isaac and a few billion other particles, the whole ball of whacks inherits the angular momentum that each of its stuck-together components had.  Any particle or planetoid that tries to make a break for it up- or down-vortex gets pulled back into the disk by gravity.

That theory does a pretty good job on the conventional Solar System — four rocky Inner Planets, four gas giant Outer Planets, plus that host of asteroids and such, all tightly held in the Plane of The Ecliptic.

How then to explain out-of-plane objects like Pluto and Eris, not to mention long-period comets with orbits at all angles? 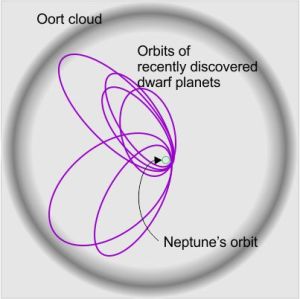 We now know that the Solar System holds more than we used to believe.  Who’s in is still “objects whose motion is dominated by the Sun’s gravitational field,” but the Sun’s net spreads far further than we’d thought.  Astronomers now hypothesize that after its creation in the vortex, the Sun accumulated an Oort cloud — a 100-billion-mile spherical shell containing a trillion objects, pebbles to planet-sized.

At the shell’s average distance from the Sun (see how tiny Neptune’s path is in the diagram) Solar gravity is a millionth of its strength at Earth’s orbit.  The gravity of a passing star or even a conjunction of our own gas giants is enough to start an Oort-cloud object on an inward journey.

These trans-Neptunian objects are small and hard to see, but they’re revolutionizing planetary astronomy.