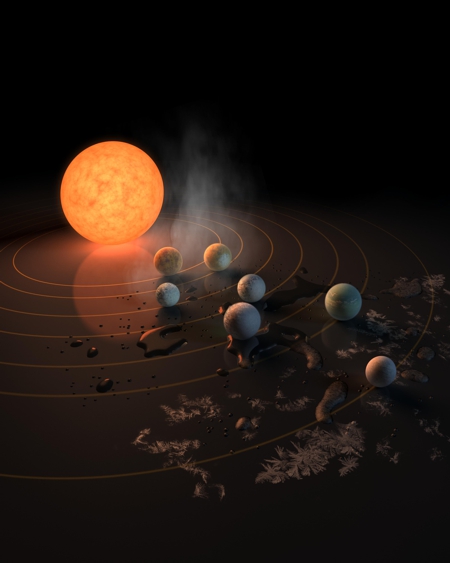 “I’m calling this The Trappist.  It’s got raspberry jam!”

“In honor of TRAPPIST-1, you know, that star they just found a bunch of planets around.”

“Your coffee shop being right next to the Astronomy building, I guess you’ve heard a lot about it.”

“Sy, you couldn’t believe.  The planetologists are going nuts of course, even though no-one’s actually seen the planets, and the astrometrics folks are lining up for telescope time ’cause they’ve got a whole new class of stars to monitor and of course the astrophysicists get to figure out how the system even works.”

“Yeah, the high-precision star-measurers.  They didn’t used to pay attention to the small, dim stars because why bother.  But now … woo-hoo, whole new ballgame.”

“Nobody’s seen those planets?  How do they know they’re there?”

“Process of elimination, Sy.  The TRAPPIST telescopes picked up repetitive dark blips in the light coming from that star.  It’s a close, fast-moving star so there’s no sense supposing it’s like going behind or in front of a regular array of rocks or stars or something.  It’s not wobbling side-to-side like it would if it was a binary so it’s not traveling along with another star.  If the blips were sunspots going around as the star rotates there’d be only one rhythm, but these blips come in too complicated for that.  Besides, the star’s low-activity, too cool for lotsa sunspots.  Gotta be planets eclipsing it.”

“Hey Sy, there was something else, maybe you could explain it.  One astrophysics guy was real impressed that the planets had residences.  I didn’t understand that.”

“Had something to do with the blip periods.  Yeah, here’s the paper napkin he wrote ’em all down on.”

“Oh, resonances! That I recognize, and yeah, those numbers are much more convincing.  Remember my post about gear logic?”

“Sorry, Sy, that must’ve been a long time ago and who has time to read?”

“I understand.  OK, that post explained how planets that survive the early chaos of a forming solar system tend to wind up in orbits whose relative year-lengths form ratios of small whole numbers.  In our system, for instance, the length of Pluto’s year is exactly 3/2 of Neptune’s, Neptune’s year is twice that of Uranus, and so on.  If a planet doesn’t synch up with its neighbors, it’ll collide with someone or be flung out of the system.  Put another way, a system’s not stable if its planetary orbit periods are just any old numbers.  Make sense?”

“So look at this guy’s table.  The periods of each pair of adjacent objects follow that rule almost exactly.  Five times c‘s period is less than 0.25% away from eight times b‘s, and so on all the way out to h, which I take it has an uncertain period because the guy put in that question mark.  In fact, I think this system follows the rule more tightly than our Solar System does.  As far as I’m concerned that regularity in the periods makes the case for TRAPPIST-1 having planets.  You hear anything else?”

“Yeah, there was a lot of excitement about the middle three planets being in some kind of Goldilocks zone.  What’s that about?”

“Hah, I’d be excited, too.  If a planet’s too close to the star, like Mercury is to ours, it’ll be too hot for liquid water.  If the planet’s too far, any water it has would be frozen stiff.  Either way, not good for life to grow there.  In the Goldilocks zone, it’s…”