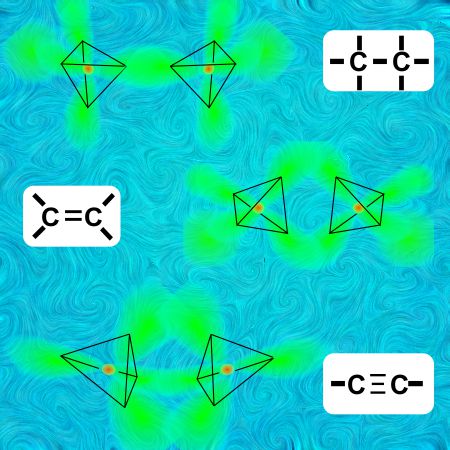 “What you said back there, about all molecules being tetrahedron-shaped.”

“What kinds are you leaving out?”

“Molecular hydrogen, for instance.  It’s probably the most common molecule in the Universe but it’s got only two atoms and two electrons and it doesn’t do tetrahedra.  I was talking about almost all the other flavors.  Molecules can have all kinds of shapes, from spherical to long and skinny.  Say, Eddie, do your kids play with Legos?”

“Geez, yes.  My feet find blocks all over the house.  Only thing worse is glitter.”

“You can build just about any shape from those rectangular blocks, right?  Pegs on one block plug into holes on other blocks and pretty soon you’ve got a rocket ship or something.  Atoms can work the same way.  Four bonding orbitals pointing out to those pyramid corners, ready to share with whatever comes along.”

“Not just with hydrogen like with that CH4 stuff?”

“Depends on the atom, but in general, yeah.  Except for the outermost columns of the Periodic Table, most of the elements in the upper rows can be persuaded to share at least one bond with most of the others.  Carbon’s the champ that links with practically everything.” 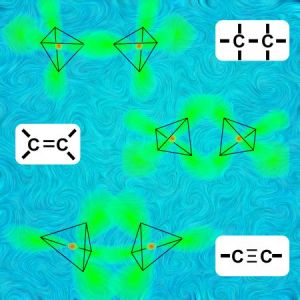 “Especially carbon, Vinnie.  Linking to carbon is carbon’s best thing.  It’s even got three and a fraction different ways to do it.  Here’s a sketch.  It boils down to the different ways you can have two tetrahedra match up points.”

“Lemme look at this for a minute… OK, that point-to-point one at the top —”

“Whatever, you’re saying that could be like two –CH3 pieces tied together.”

“Mm-hm.  The –CH3‘s are methyl groups, and with two of them you’ve got ethane.  Or link a methyl to a –CH2CH3 and you’ve got propane, or link it to an –OH to get methyl alcohol.  At least in principle you can pop a methyl onto any other atom or molecule that started off with only one unit of charge in an unshared orbital.”

“So it’s like my daughter’s bead necklace where she can pop it apart and add all different kinds of beads.”

“Exactly, Eddie, except her beads probably have their two links in a straight line.  These atoms support four links at 109° angles to each other.”

“That picture reminds me of one of my kids’ toys that’s like a top spinning on top of another top.  Is there anything that locks the two sides together so they can’t do that?”

“One way is if the two sides are each linked to bulky groups that get in each other’s way.  Hydrogens don’t much.  Scientists have measured methyl group rotation rates above 10 million cycles per second.”

“Hey, I’m still looking over here.  These other diagrams say that the tetrahedron things can link along an edge —”

“That’d be a double bond, Vinnie.”

“Looks to me like those double-bond shapes are locked in.  No rotation there, right?”

“Right.  In fact, rotational stability across a double bond is so strong that different arrangements operate like different compounds.  Switching A\B:C\D to A\B:D\C can be the difference between a useful med and something that’s inert or even toxic.”

“And I suppose when they match up whole triangles that’s a triple bond?”

“Nah, Vinnie, that’s like the atom-in-a-field thing, no difference between x- and y- axes.  Spinning like crazy except you can’t see it.”

“Eddie’s right, Vinnie.  The four atoms in a triple-bond structure are in a line.  The charge of three electron pairs mushes into a barrel-shaped region between the two carbons.”

“All that pent-up charge, I bet it’s reactive as hell.”

“Uh-huh.  With hydrogen atoms at both ends that’s acetylene gas.  Let that stuff touch copper and you get explosive decomposition.”

“So that’s why they say don’t run acetylene through copper tubing or brass fittings.”

“Believe it, Vinnie.  Believe it.”