“It’s worse than that, Vinnie.”  I pull out Old Reliable, my math-monster tablet.  “Let me scan in that three-electron drawing of yours.” 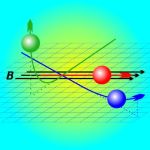 “Good enough to keep a record of it?”

“Nope, I want to exercise a new OVR app I just bought.”

“Uh-uh, this is Original Vector Reconstruction, not Optical Character Recognition.    OCR lets you read a document into a word processor so you can modify it.  OVR does the same thing but with graphics.  Give me a sec … there.  OK, look at this.”

“Cool, you turned my drawing 180°, sort of.  Nice app.  Oh, and you moved the red electron’s path so it’s going opposite to the blue electron instead of parallel to the magnetic field.  Why’d you bother?”

“See the difference between blue and red?”

“Well, yeah, one’s going up, one’s going down.  That’s what I came to you about and you shot down my theory.  Those B-arrows in the magnetic field are going in completely the wrong direction to push things that way.”

“Well, actually, they’re going in exactly the right direction for that, because a magnetic field pushes along perpendiculars.  Ever hear of The Right Hand Rule?”

“That works, too, but it’s not the rule I’m talking about.  If you point your thumb in the direction an electron is moving, and your index finger in the direction of the magnetic field, your third finger points in the deflection direction.  Try it.”

“Hurts my wrist when I do it for the blue one, but yeah, the rule works for that.  It’s easier for the red one.  OK, you got this rule, fine, but why does it work?”

“Part of it goes back to the vector math you don’t want me to throw at you.  Let’s just say that there are versions of a Right Hand Rule all over physics.  Many of them are essentially definitions, in the same way that Newton’s Laws of Motion defined force and mass.  Suppose you’re studying the movements directed by some new kind of force.  Typically, you try to define some underlying field in such a way that you can write equations that predict the movement.  You haven’t changed Nature, you’ve just improved our view of how things fit together.”

“So you’re telling me that whoever made that drawing I copied drew the direction those B-arrows pointed just to fit the rule?”

“Almost.  The intensity of the field is whatever it is and the lines minus their pointy parts are wherever they are.  The only thing we can set a rule for is which end of the line gets the arrowhead.  Make sense?” 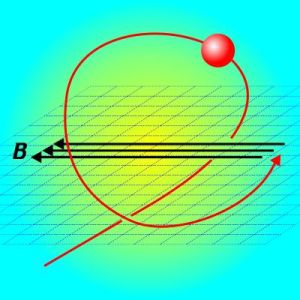 “I suppose.  But now I got two questions instead of the one I come in here with.  I can see the deflection twisting that electron’s path into a spiral.  But I don’t see why it spirals upward instead of downward, and I still don’t see how the whole thing works in the first place.”

“I’m afraid you’ve stumbled into a rabbit hole  we don’t generally talk about.  When Newton gave us his Law of Gravity, he didn’t really explain gravity, he just told us how to calculate it.  It took Einstein and General Relativity to get a deeper explanation.  See that really thick book on my shelf over there?  It’s loaded with tables of thermodynamic numbers I can use to calculate chemical reactions, but we didn’t start to understand those numbers until quantum mechanics came along.  Maxwell’s equations let us calculate electricity, magnetism and their interaction — but they don’t tell us why they work.”

“I get the drift.  You’re gonna tell me it goes up because it goes up.”

“That’s pretty much the story.  Electrons are among the simplest particles we know of.  Maxwell and his equations gave us a good handle on how they behave, nothing on why we have a Right Hand Rule instead of a Left Hand Rule.  The parity just falls out of the math.  Left-right asymmetry seems to have something to do with the geometry of the Universe, but we really don’t know.”

“Physicists have spent 50 years grinding on that without a testable result.  I’m not holding my breath.”