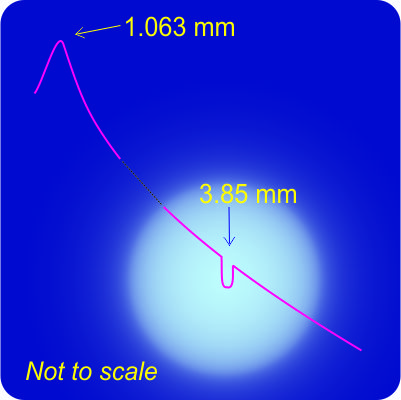 Suddenly Al’s standing at our table.  “Hey guys, I heard you talking about spectroscopy and stuff and figured you could maybe ‘splain something I read.  Here’s some scones and I brought a fresh pot of coffee..”

“Thanks, Al.  What’s the something?  I’m sure Cathleen can ‘splain.”

“It’s this article talking about some scientists going down to Australia to use really old light to look for younger light and it’s got something to do with dark matter and I’m confused.”

“Yeah, I’m pretty sure they said ‘EDGES’ in the article.”

“OK, first we need some background on the background, that really old light you mentioned.  The Cosmic Microwave Background is the oldest light in the Universe, photons struggling out of the white-hot plasma fog that dominated most of the first 377,000 years after the Big Bang.”

“Cathleen showed me an intensity-frequency plot for those suddenly-free photons.  It was a virtually perfect blackbody curve, identical within a couple parts per million everywhere in the sky.  The thing is, the curve corresponds to a temperature of only 2.73K.  Its peak is in the microwave region, hence the CMB moniker, nestled in between far infrared and HF radio.”

“Wavelength-stretching, Vinnie, remember?  Universe expansion stretches the photon waves we measure temperatures with, the further the longer just like Hubble said.  The CMB’s the oldest light in the Universe, coming to us from 13.4 billion lightyears away.  The stretch factor is about 1100.”

“Vinnie, that 2.7K blackbody radiation is the background to the story.  Think of it as a spherical shell around the part of the Universe we can see.  There are younger layers inside that shell and older layers beyond it.”

“What could be outside the Universe, Cathleen?”

“Hey, Al, I carefully said, ‘the part of the Universe we can see.’  I’m quite sure that the Universe extends beyond the spatial volume we have access to, but light from out there hasn’t had a chance to get to us yet.  Going outward from our CMB sphere there’s that 337,000-year-deep shell of electron-nucleus fog.  Beyond that, 47,000 years-worth of quark soup and worse, out to the Big Bang itself.  Coming inward from the CMB we see all the things we know of that have to do with atoms.”

“Well, not immediately, they took a billion years to build up.  First we had to get through the Dark Ages when there weren’t any photons in the visible light range.  We had huge clouds of hydrogen and helium atoms but virtually all of them were in the ground state.  The CMB photons running around were too low-energy to get any chemistry going, much less nuclear processes.  The Universe was dark and cooling until gravitational attraction made clumps of gas dense enough to light up and become stars.  That’s when things got going.”

“How’d that make a difference?”

“A ground state hydrogen atom’s lowest available empty energy level is way above what a CMB photon could supply.  Those Dark Age atoms were essentially transparent to the prevailing electromagnetic radiation.  But when starlight came along it excited some atoms so that they could also absorb CMB light.  See the notch on the long-wavelength side of this blackbody curve?  It marks the shadow of starlit hydrogen clouds against the CMB’s glow.  The notch wavelength indicates when the absorption started.  Its position suggests that some stars lit up as early as 180 million years after the Big Bang.”

“Mm-hm.  There are other interpretations.  That’s where the fun comes in, both on the theory side and the get-more-data side.  Like looking at different times.”

“Every wavelength represents a different stretch factor and a different depth into the past.”