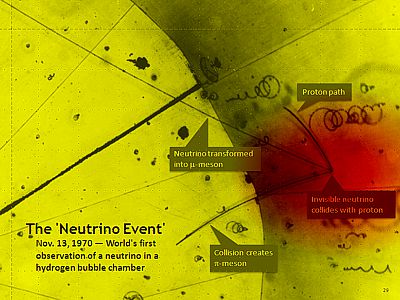 Cathleen steps into at Al’s for her morning coffee-and-scone.  “Heard you guys talking neutrinos so I’ll bet Al got you started with something about IceCube.  Isn’t it an awesome project?  Imagine instrumenting a cubic kilometer of ice, and at the South Pole!”

“Ya got me, Cathleen.  It knocked me out that anyone would even think of building it.  Where did the idea come from, anyhow?”

“I don’t know specifically, but it’s got a lot of ancestors, going back to the Wilson Cloud Chamber in the 1920s.”

“Oh, the cloud chamber!  Me and my brother did one for the Science Fair — used dry ice and some kind of alcohol in a plastic-covered lab dish if I remember right, and we set it next to one of my Mom’s orange dinner plates.  Spooky little ghost trails all over the place.”

“That’s basically what the first ones were.  An incoming particle knocks electrons out of vapor molecules all along its path.  The path is visible because the whole thing is so cold that other vapor molecules condense to form micro-droplets around the ions.  Anderson’s cloud chambers were good enough to get him a Nobel Prize for discovering the positron and muon.  But table-top devices only let you study low-energy particles — high-energy ones just shoot through the chamber and exit before they do anything interesting.”

“So the experimenters went big?”

“Indeed, Sy, massive new technologies, like bubble chambers holding thousands of gallons of liquid hydrogen or something else that reacts with neutrinos.  But even those experiments had a problem.”

“They all depended on photography to record the traces.  Neutrino-hunting grad students had to measure everything in the photos, because neutrinos don’t make traces — you only find them by finding bigger particles that were disturbed just so.  The work got really intense when the astrophysicists got into the act, trying to understand why the Sun seemed to be giving off only a third of the neutrinos it’s supposed to.  Was the Sun going out?”

“Wait, Cathleen, how’d they know how many neutrinos it’s supposed to make?”

“Wow, Vinnie, you sure know how to break up a narrative, but it’s a fair question.  OK, quick answer.  We know the Sun’s mostly made of hydrogen and we know how much energy it gives off per second.  We’ve figured out the nuclear reactions it must be using to generate that energy.  The primary process combines four hydrogen nuclei  to make a helium nucleus.  Each time that happens you get a certain amount of energy, which we know, plus two neutrinos.  Do the energy arithmetic, multiply the number of heliums per second by two and you’ve got the expected neutrino output.”

“As usual, Al cuts to the chase.  No, Al, it’s still got 5 billion years of middle age ahead of it.  The flaw in the argument was that we assumed that our detectors were picking up all the neutrinos.”

“Yes, Vinnie.  Our detector technology at the time only saw electron neutrinos.  The Sun’s reactions emit electron neutrinos.  But the 93-million mile trip to Earth gave those guys plenty of time to oscillate through muon neutrino to tau neutrino and back again.  All we picked up were the ones that had gone through an integer number of cycles.”

“We changed technology, I take it?”

“Right again, Sy.  Instead of relying on nuclear reactions initiated by electron neutrinos, we went so spark chambers — crossed grids of very fine electrified wire in a box of argon gas.  Wherever a passing neutrino initiated an ionization, zap! between the two wires closest to that point.  Researchers could computerize the data reduction.  Turns out that all three neutrino flavors are pretty good at causing ionizations so the new tech cleared up the Solar Paradox, but only after we solved a different problem — the new data was point-by-point.  Working back from those points to the traces took some clever computer programming.”

“Ah, I see the connection with IceCube.  It doesn’t register traces, either, just the points where those sensors see the Cherenkov flashes.  It’s like a spark chamber grown big.”