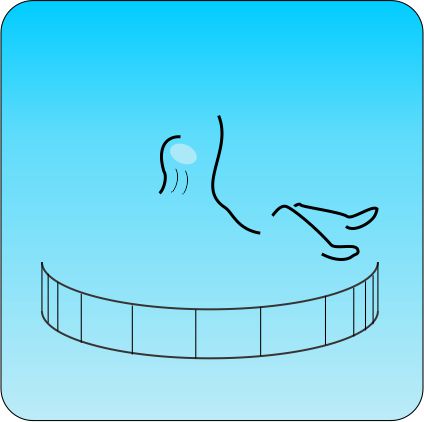 Teena bounces out of the sandbox, races over to the playground’s little merry-go-round and shoves it into motion. “Come help turn this, Uncle Sy, I wanna go fast!” She leaps onto the moving wheel and of course she promptly falls off. The good news is that she rolls with the fall like I taught her to do.

“Mmmo-MMENN-tumm. But that had to do with swings.”

“Swings and lots of other stuff, including merry-go-rounds and even why you should roll with the fall. Which, by the way, you did very well and I’m glad about that because we don’t want you getting hurt on the playground.”

“Well, it does hurt a little on my elbow, see?”

“Let me look … ah, no bleeding, things only bend where they’re supposed to … I think no damage done but you can ask your Mommie to kiss it if it still hurts when we get home. But you wanted to know why you fell off so let’s go back to the sandbox to figure that out.”

“Of course you did. OK, let’s draw a big arc and pretend that’s looking down on part of the merry-go-round. I’ll add some lines for the spokes and handles. Now I’ll add some dots and arrows to show what I saw from over here. See, the merry-go-round is turning like this curvy arrow shows. You started at this dot and jumped onto this dot which moved along and then you fell off over here. Poor Teena. So you and your momentum mostly went left-to-right.”

“But that’s not what happened, Uncle Sy. Here, I’ll draw it. I jumped on but something tried to push me off and then I did fall off and then I rolled. Poor me. Hey, my arm doesn’t hurt any more!”

“How about that? I’ve often found that thinking about something else makes hurts go away. So what do you think was trying to push you off? I’ll give you a hint with these extra arrows on the arc.”

“Good thinking, Teena. Mr Newton would say that you got that momentum from a force in the out-direction. He’d also say that if you want to stand steady you need all the forces around you to balance each other. What does that tell you about what you need to do to stay on the merry-go-round?”

“I need an in-direction force … Hah, that’s what I did wrong! I jumped on but I didn’t grab the handles.”

“But what about the rolling?”

“Well, in general when you fall it’s nearly always good to roll the way your body’s spinning and only try to slow it down. People who put out an arm or leg to stop a fall often stress it and and maybe even tear or break something.”

“That’s what you’ve told me. But what made me spin?”

“One of Mr Newton’s basic principles was a rule called ‘Conservation of Momentum.’ It says that you can transfer momentum from one thing to another but you can’t create it or destroy it. There are some important exceptions but it’s a pretty good rule for the cases he studied. Your adventure was one of them. Look back at the picture I drew. You’d built up a lot of going-around momentum from pushing the merry-go-round to get it started. You still had momentum in that direction when you fell off. Sure enough, that’s the direction you rolled.”

“Is that the ‘Conversation of Energy’ thing that you and Mommie were talking about?”

“Conservation. It’s not the same but it’s closely related.”

“Why does it even work?”

“Ah, that’s such a deep question that most physicists don’t even think about it. Like gravity, Mr Newton described what inertia and momentum do, but not how they work. Einstein explained gravity, but I’m not convinced that we understand mass yet.”

2 thoughts on “Conversation of Momentum”