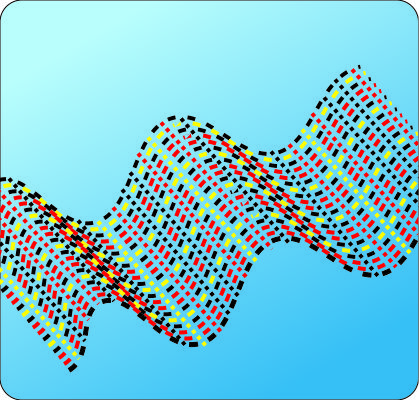 Our lake-side jog has slowed to a walk and suddenly Mr Feder swerves off the path to thud onto a park bench. “I’m beat.”

Meanwhile, heavy footsteps from behind on the gravel path and a familiar voice. “Hey, Sy, you guys talking physics?”

“Well, we were, Vinnie. Waves, to be exact, but Feder’s faded and anyway his walk wasn’t fast enough to warm me up.”

“Not a whole lot. So many different kinds of waves but physicists have abstracted them down to a common theme — a pattern that moves through space.”

“That image would work if each fiber color carried specific values of energy and momentum and the cross-fibers somehow add together and there’s lots of waves coming from all different directions so it’s 3-D.”

“As complicated as the sound from a symphony.”

“Same principle. Trumpet, trombone, clarinet, banjo — many layers of harmony but you can choose to tune in on just one line. That’s a clue to how physicists un-complicate waves.”

“Back in the early 19th century, Fourier showed that you can think about any continuous variation stream, no matter how complicated, in terms of a sum of very simple variations called sine waves. You’ve seen pictures of a sine wave — just a series of Ss laid on their sides and linked together head-to-tail.”

“Mm-hm, except these wiggles are perfectly regular — evenly spaced peaks, all with the same height. The regularity is why sine waves are so popular. Show a physicist something that looks even vaguely periodic and they’ll immediately start thinking sine wave frequencies. Pythagoras did that for sound waves 2500 years ago.”

“Nah, he couldn’t have — he died long before Fourier.”

“Good point. Pythagoras didn’t know about sine waves, but he did figure out how sounds relate to spatial frequencies. Pluck a longer bowstring, get a lower note. Pinch the middle of a vibrating string. The strongest remaining vibration in the string sounds like the note from a string that’s half as long. Pythagoras worked out length relationships for the whole musical scale.”

“You said ‘spacial frequency’ like there’s some other kind.”

“Cute. Does that space frequency/time frequency pair-up work for all kinds of waves?”

“Mostly. It doesn’t work for standing waves. Their energy’s trapped between reflectors or some other way and they just march in place. Their time frequency is zero peaks per second whatever their peaks per meter space frequency may be. Interesting effects can happen if the wave velocity changes, say if the wave path crosses from air to water or if there’s drastic temperature changes along the path.”

“Hah! Mirages! Wait, that’s light getting deflected after bouncing off a hot surface into cool air. Does sound do mirages, too?”

“Sure. Our hearing’s not sharp enough to notice sonic deflection by thermal layering in air, but it’s a well-known issue for sonar specialists. Echoes from oceanic cold/warm interfaces play hob with sonar echolocation. I’ll bet dolphins play games with it when the cold layer’s close enough to the surface.”

“Those guys will find fun in anything. <pause> So Pythagoras figured sound frequencies playing with a bow. Who did it for light?”

“Who else? Newton, though he didn’t realize it. In his day people thought that light was colorless, that color was a property of objects. Newton used the rainbow images from prisms to show that color belonged to light. But he was a particle guy. He maintained that every color was a different kind of particle. His ideas held sway for over 150 years until Fresnel convinced the science community that lightwaves are a thing and their frequencies determine their color. Among other things Fresnel came up with the math that explained some phenomena that Newton had just handwaved past.”

“Fresnel was more colorful than Newton?”