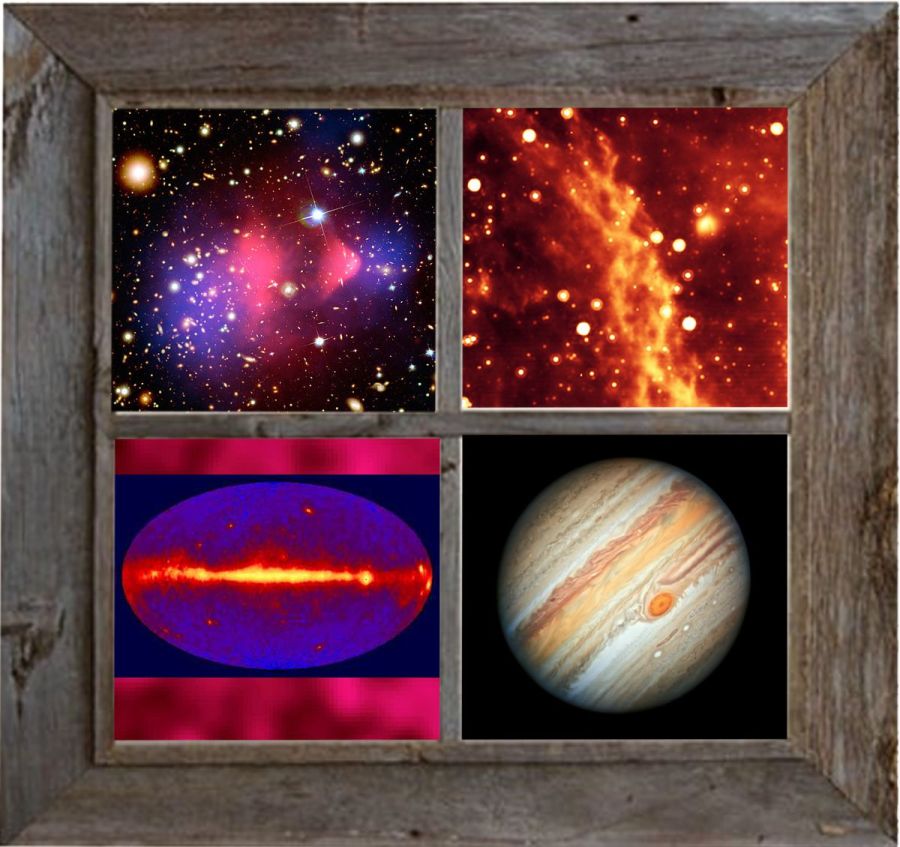 Jim hands the mic to Cathleen, who announces, “Bio-break time. Please be back here in 15 minutes for the next speaker. Al will have fresh coffee and scones for us.” <a quarter-hour later> “Welcome back, everyone, to the next session of our ‘IR, Spitzer and the Universe‘ memorial symposium. Our next speaker will turn our focus to the Spitzer Space Telescope itself. Newt?”

“Thanks, Cathleen. Let’s start with a portrait of Spitzer. I’m putting this up because Spitzer‘s general configuration would fit all four of NASA’s Great Observatories…

“Each of them was designed to be carried into space by one of NASA’s space shuttles so they had to fit into a shuttle’s cargo bay — a cylinder sixty feet long and fifteen feet in diameter. Knock off a foot or so each way to allow for packing materials and loading leeway.”

<voice from the crowd> “How come they had to be in space? It’d be a lot cheaper on the ground.”

“If you’re cynical you might say that NASA had built these shuttles and they needed to have some work for them to do. But the real reasons go back to Lyman Spitzer (name sound familiar?). Right after World War II he wrote a paper listing the benefits of doing Astronomy outside of our atmosphere. We think Earth’s atmosphere is transparent, but that’s only mostly true and only at certain wavelengths. Water vapor and other gases block out great swathes of the infra‑red range. Hydrogen and other atoms absorb in the ultra‑violet and beyond. Even in the visible range we’ve got dust and clouds. And of course there’s atmospheric turbulence that makes stars twinkle and astronomers curse.”

“So he wanted to put telescopes above all that.”

“Absolutely. He leveraged his multiple high-visibility posts at Princeton, constantly promoting government support of high-altitude Astronomy. He was one of the Big Names behind getting NASA approved in the first place. He lived to see the Hubble Space Telescope go into service, but unfortunately he died just a couple of years before its IR companion was put into orbit.”

“So they named it after him?”

“They did, indeed. The Spitzer was the fourth and final product of NASA’s ‘Great Observatories’ program designed to investigate the Universe from beyond Earth’s atmosphere. The Hubble Space Telescope was first. It was built to observe visible light but it also gave NASA experience doing unexpected in‑flight satellite repairs. <scattered chuckles in the audience. The maybe-an-Art-major nudges a neighbor for a whispered explanation.> The Atlantis shuttle put Hubble into orbit in 1990. Thirty years later it’s still producing great science for us.”

<The maybe-an-Art-major yells out> “And beautiful pictures!”

“Yes, indeed. OK, a year later Atlantis put Compton Gamma Ray Observatory into orbit. Its sensors covered a huge range of the spectrum, about twenty octaves as Jim would put it, from hard X-rays on upward. In its nine years of life it found nearly 300 sources for those high-energy photons that we still don’t understand. It also detected some 2700 gamma ray bursts and that’s something else we don’t understand other than that they’re way outside our intergalactic neighborhood.”

“Sad, right? Yeah, one of its gyroscopes gave out and NASA had to bring it down. Some people fussed, ‘It’ll come down on our heads and we’re all gonna die!‘ but the descent stayed under control. Most of the satellite burned up on re-entry and the rest splashed harmlessly into the Indian Ocean.”

“Cheer up, it gets better. A month and a half after Compton‘s end, the Columbia shuttle put Chandra X-Ray Observatory into orbit. Like Hubble, Chandra‘s still going strong and uncovering secrets for us. Chandra was first to record X-rays coming from the huge black hole at the Milky Way’s core. Chandra data from the Bullet Cluster helped confirm the existence of dark matter. Thanks to Chandra we understand Jupiter’s X-ray emissions well enough to steer the Juno spacecraft away from them. The good stuff just keeps coming.”

“Thanks, that helps me feel better.”

“Good, because it’s time for the Spitzer‘s inspirational life story.”