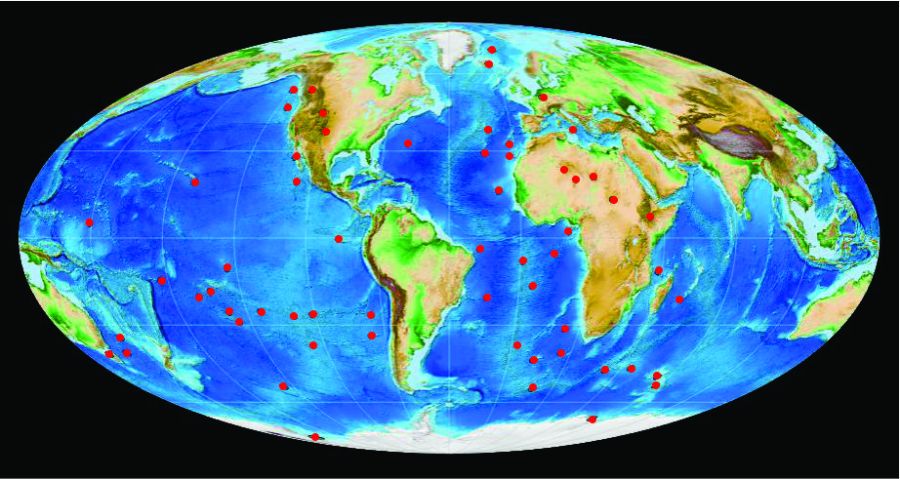 “Hey, if you guys are gonna use one of my tables at lunchtime, you oughtta order pizza.”

“Eddie, Eddie, you’re the one asking the questions that kept Kareem here into lunch hour. You owe him, seems to me.”

“Nothing, thanks, unless you’ve got a halal oven.”

“Matter of fact I do, sort of. There’s a hotspot on the top left I only use for cheese melts so it should be OK for you. No pork spatters up there ever, that’s for sure.”

“A cheese melt would be fine, thanks.”

“Thanks for the warning, Eddie.”

“Whatcha got there, a map?”

“Mm-hm, red dots for Earth’s sixty confirmed or proposed hotspots. Sy wanted to know more about the one that did a number on India.”

“What’s a hotspot? It’s like a big volcano, right?”

“Related but not quite. Most volcanoes are near where two plates are colliding. The classic case is the volcanoes along the western coastlines of the Americas The continents push westward and ride over Pacific seafloor plates, even break off slabs they shove down into the mantle where the heat melts them. The molten material squeezes up through cracks and escapes through volcanoes. Look where the dots are, though.”

“Most of them aren’t anywhere near the edge of anything. Yellowstone and those guys in Africa are as far from an edge as you can get. And I don’t see any red dots near Japan or the Philippines which are both really active for volcanoes and earthquakes.”

“Right, Sy. The primary criterion for a hot spot is vulcanism far from plate edges. But there’s another characteristic that many share. It’s easiest to see in this close‑up. Start with the Hawai’i, Cobb and Bowie hotspots. Each one is at the head of a straight‑line chain of volcanoes, older to younger as you get closer to the hotspot. The chains even run parallel with each other. The Anahim and Yellowstone hotspots also have parallel chains but they go west‑to‑east which makes sense if the continents are moving westward. It all fits with the idea that hotspots have stable locations in the mantle, and they scribble volcanoes on the plates that move over them. That’s the basis for much of what we know about ocean‑plate motion. But.”

“There’s controversy, of course. Magnetism surveys and isotope data seem to show that some hotspots may move or even flutter slowly in some geology‑timescale wind. I just read—”

“Hey, Kareem, I’ve decorated so many pizzas with pepperoni slices I see red‑dot patterns everywhere. Your world map looks like there’s a ring of red dots around Africa and a stripe across the south Pacific. Does that mean anything?”

“We think it does, Eddie, but we’re still figuring out what. A technique called seismic tomography has given us evidence for a pair of huge somethings called LLSVPs deep into the mantle and on opposite sides of the Earth. One, unofficially known as TUZO, underlies much of Africa and that hotspot ring you noticed. The other one, JASON, is below your hotspot stripe in the South Pacific. We know very little about them so far, just that they stick out in the tomograms and they’ve probably been more‑or‑less where they are for a billion years. And no, we have no idea why hotspots appear around the edge of TUZO but along the center of JASON.”

“What else is lurking down there?”

“Who knows? The textbook diagrams show the mantle as this inert homogeneous shell sitting between core and crust. But its upper part is fluid and six times deeper than our atmosphere. The new tech is showing us currents something like winds and objects something like clouds, all at geological sizes and timescales. Classical Geophysics down there has been like doing weather science but ignoring clouds, mountains and oceans. There’s weather beneath us and we’re just beginning to see it.”