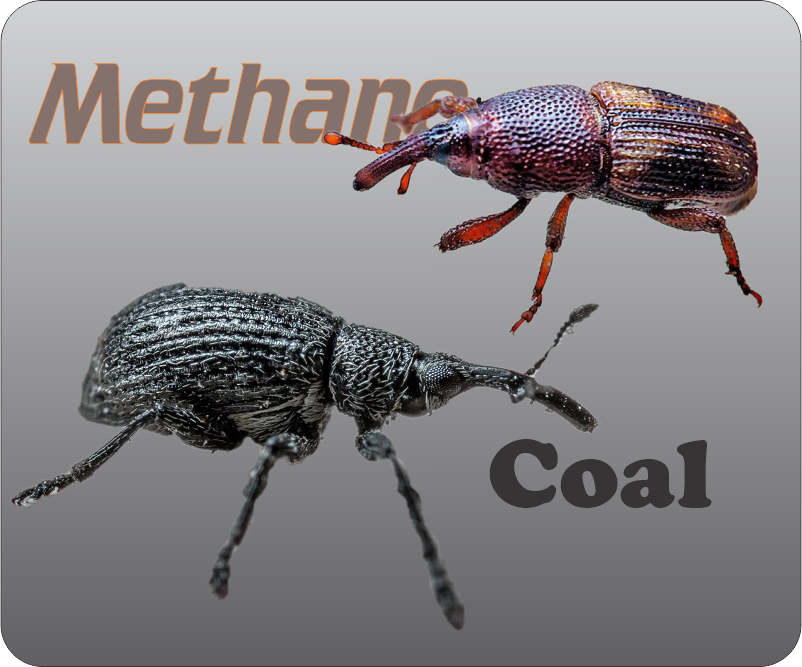 Al delivers coffees to our table, then pauses. “Why methane?”

Susan Kim looks up from her mocha latte. “Sorry?”

“Why all the fuss about methane all of a sudden? I thought carbon dioxide was the baddie. Everybody’s switching from coal to natural gas which they say is just methane and now that’s a bad thing, too. I’m confused. You’re a chemist, unconfuse me.”

“Pass me a paper napkin so I can write down the chemical reactions. When we look at them in detail there’s all kinds of complicated reaction paths, but the overall processes are pretty simple. The burnable part of coal is carbon. In an efficient coal‑fired process what happens is
C + O2 → CO2 + energy.
The C is carbon, of course and O2 is an oxygen molecule, two atoms linked together. Carbon atoms weigh 12 and each oxygen atoms weighs 16, so 12 grams of carbon produces 12+(2×16)=44 grams of CO2. Scaling up, 12 tons of carbon produces 44 tons of CO2 and so on. The energy scales up, too. and that’s what heats the boilers that make the steam that spins the turbines that make electricity.”

“I heard a couple of weasel words but go on to methane.”

“You caught them, eh? They’re important weasels and we’ll get to them. OK, methane is CH4 and its overall burn equation is
CH4 + 2O2 → CO2 + 2H2O + energy.
Oxidizing those hydrogens releases about twice as much energy per carbon as the coal reaction does.”

“Already I see one big advantage for methane — more bang per CO2. So about those weasels…”

“Right. Well, coal isn’t just pure burnable carbon. It’s 350‑million‑year‑old trees and ferns and animal carcasses and swamp muck and mineral sediments, all pressure‑baked together. There’s sulfur and nitrogen in there, mixed in with nasty elements like mercury and arsenic.”

“The extras go up the smokestack along with the CO2, huh? Bad, for sure.”

“The good news is that coal-burning power plants are under the gun to clean up those emissions. The bad news is that effective mitigation technologies themselves cost energy. That lowers the net yield. But the inefficiency gets worse. Think coal trains.”

“Yeah, half the time I get held up on the way home by one of those hundred‑car strings, either full-up heading to the power plant or empties going back for another load.”

“Mm-hm. Transporting coal takes energy, and so does mining it and crushing it and pre‑treating to get rid of dirt and then taking care of the ashes. Even less net energy output per ton of smokestack CO2, even worse inefficiency. See why coal’s on its way out?”

“I guess all that didn’t matter when it was cheap to dig up and there wasn’t much competition.”

“You put your finger on it, Al. Coal got its foot in the door with steam engines 300 years ago when about the only other things you could burn were wood and whale oil. Crude oil got big in the mid‑1800s but it had to be refined and that made it expensive. Cheap natural gas wasn’t really a thing until fracking came along 50 years ago, but that brought a different set of issues.”

“Yeah, I’ve seen videos of people lighting their kitchen sink water on fire. And wasn’t there an earthquake thing in Oklahoma?”

“That was an interesting situation. Oklahoma’s in the middle of the continent, not a place you’d expect earthquakes, but they began experiencing flurries of shallow ones in 2011. The fracking process starts with water pumped at high pressure into gas-bearing strata to loosen things up. People suspected fracking was connected to the earthquakes. It was, but only indirectly. When fracked gas comes out of a well, water does, too. The rig operators pump that expelled water down old oil wells. Among other things, the state’s Corporation Commission is in charge of their hydrocarbon production. When the Commission ordered a 60% cut in the waste‑water down‑pumping, the earthquake rate dropped by 90%. Sometimes regulations are good things, huh?”

3 thoughts on “Going from Worse to Bad”