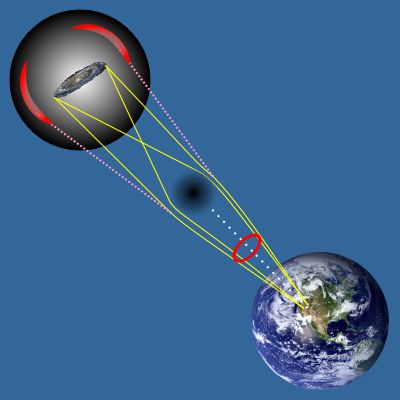 Cathleen and I are chatting when Vinnie bursts into the coffee shop waving a newspaper. “New news, guys, they’ve just announced Hubble spotted the farthest‑away star. How about that? Think what JWST will be able to do!”

Cathleen raises an eyebrow. “Sounds like press release science. What else do they say?”

“Not a whole lot. Lessee… These guys went through old Hubble data and found a piece of an Einstein ring which I don’t know what that is and partway along the ring is a star and somehow they figured out it’s 50 times heavier than the Sun and 12 billion years old and it’s the farthest star they’ve ever seen and that’s why NASA’s all excited.”

“Do you believe all that?”

“Maybe the NASA PR people do?”

“Maybe. I just read the technical paper behind that announcement. The authors themselves aren’t absolutely sure. The paper’s loaded with supporting evidence and ‘how we did it‘ details but it’s also loaded with caveats. The text includes a string of alternative explanations for their observations, winding up with a typical ‘we await further evidence from JWST‘ statement. Reads a lot more like real science. Besides, we’ve already seen more distant stars but they’re all jumbled together inside their very distant galaxies.”

“Unpack it for me. Start with what’s an Einstein ring?”

“Thanks. Vinnie, you know how a prism changes light’s direction.”

“Sy and me, we talked about how a prism bends light when light crosses from air to glass or the other way ’cause of the different speed it goes in each material. Uhh, if I remember right the light bends toward the slower speed, and you get more bend with shorter wavelengths.”

“Bingo, Vinnie. Gravitational lensing also bends light, but the resemblance ends there. The light’s just going through empty space, not different media. What varies is the shape of spacetime itself. Say an object approaches a heavy mass. Because of relativity the space it moves through appears compressed and its time is dilated. Compressed distance divided by dilated time means reduced velocity. Parts of a spread‑out lightwave closest to the mass slow down more than parts further way so the whole wave bends toward the heavy mass. Okay?”

“Hold on. Umm, so in your picture light coming towards us from that galaxy doesn’t get blocked by that black thingy, the light bends around it on both sides and focuses in on us?”

“Exactly. Now carry it further. The diagram cuts a flat 2D slice along round 3D spatial reality. Those yellow lines really are cones. Three‑sixty degrees around the black blob, the galaxy’s light bends by the same amount towards the line between us and the blob. Your Einstein ring is a cut across the cone, assuming that the galaxy, the blob and Earth are all exactly on the same straight line. If the galaxy’s off‑center the picture isn’t as pretty — you only get part of a ring, like those red arcs in Sy’s diagram.”

“A galactic rainbow. That ought to be awesome!”

“Well it would be, but there’s another difference between prisms and blobs. Rainbows happen because prisms and raindrops bend short‑wavelength colors more than longer ones, like you said. Gravitational lensing doesn’t care about wavelength. Wavelengths do shift as light traverses a gravitational well but the outbound red shift cancels the inbound blue shift.. Where gravity generates an Einstein ring, all wavelengths bend through the same angle. Which is a good thing for bleeding‑edge astronomy researchers.”

“If the effect were wavelength‑dependent we’d have aberration, the astronomer’s nemesis. Images would be smeared out. As it is, all the photons from a point hit the same spot on the sensor and we’ve got something to see.”

“Tell him about amplification, Cathleen.”

“Good point, Sy. Each galactic star emits light in every direction. In effect, the blob collects light over its entire surface area and concentrates that light along the focal line. We get the brightest image when the stars are aligned right.”