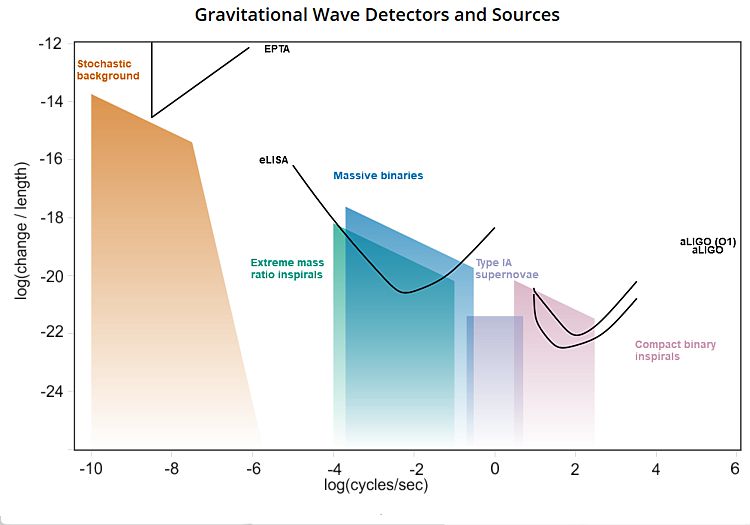 Oh, it’s good to see Big News in hard science get big attention in Big Media.  The LIGO story and Columbia’s Dr Brian Greene even made it to the Stephen Colbert Late Show.  Everyone chuckled at the final “boowee-POP” audio recording (simulation at 7:30 into this clip; get for-real traces and audio from this one).

There’s some serious science in those chirps, not to mention serious trouble for any alien civilization that happened to be too close to the astronomical event giving rise to them.

The peaks and valleys in the top LIGO traces represent successive spatial compression cycles generated by two massive bodies orbiting each other.  There’s one trace for each of the two LIGO installations.  The spectrograms beneath show relative intensity at each frequency.  Peaks arrived more rapidly in the last 100 milliseconds and the simulated sound rose in pitch because the orbits grew smaller and faster.  The audio’s final POP is what you get from a brief but big disturbance, like the one you hear when you plug a speaker into a live sound system.  This POP announced two black holes merging into one, converting the mass-energy of three suns into a gravitational jolt to the Universe.

Scientists have mentioned in interviews that LIGO has given us “an ear to the Universe.”  That’s true in several different <ahem> senses.  First, we’ve seen in earlier posts that gravitational physics is completely different from the electromagnetism that illuminates every kind of telescope that astronomers have ever used.  Second, black hole collisions generate signals in frequencies that are within our auditory range.  Finally, LIGO was purposely constructed to have peak sensitivity in just that frequency range.

Virtually every kind of phenomenon that physicists study has a characteristic size range and a characteristic frequency/duration range.  Sound waves, for instance, are in the audiophile’s beloved “20 to 20,000” cycles per second (Hz).  Put another way, one cycle of a sound wave will last something between 1/20 and 1/20,000 second (0.05-0.000 05 second).  The speed of sound is roughly 340 meters per second which puts sound’s characteristic wavelength range between 17 meters and 17 millimeters.

No physicist would be surprised to learn that humans evolved to be sensitive to sound-making things in that size range.  We can locate an oncoming predator by its roar or by the snapping twig it stepped on but we have to look around to spot a pesky but tiny mosquito.

So the greenish box in the chart below is all about sound waves.  The yellowish box gathers together the classes of phenomena scientists study using the electromagnetic spectrum.  For instance, we use infra-red light (characteristic time range 10-15-10-12 second) to look at (or cause) molecular vibrations. 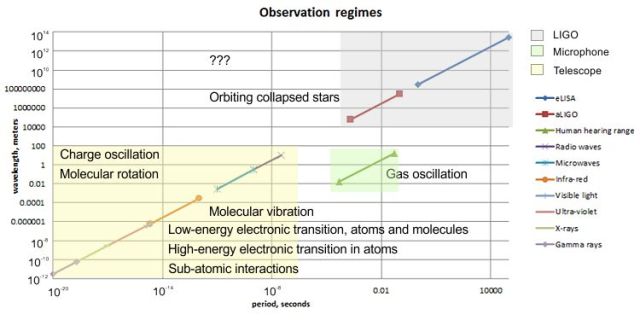 The electromagnetic spectrum serves us well, but it has its limitations.  The most important is that there are classes of objects out there that neither emit nor absorb light in any of its forms.  Black holes, for one.  They’re potentially crucial to the birth and development of galaxies.  However, we have little hard data on them against which to test the plethora of ideas the theoreticians have come up with.

Dark matter is another.  We know it’s subject to gravity, but to our knowledge the only way it interacts with light is by gravitational lensing.  Most scientists working on dark matter wield Occam’s Razor to conclude it’s pretty simple stuff.  Harvard cosmologist Dr Lisa Randall has suggested that there may be two kinds, one of which collects in disks that clothe themselves in galaxies.

That’s where LIGO and its successors in the gray box will help.  Their sensitivity to gravitational effects will be crucial to our understanding of dark objects.  Characteristic times in tens and thousands of seconds are no problem nor are event sizes measured in kilometers, because astronomical bodies are big.

This is only the beginning, folks, we ain’t seen nothin’ yet.