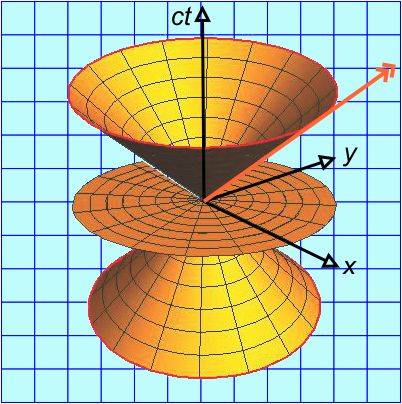 Terry Pratchett’s anthropomorphic character Death (who always speaks in UPPER CASE with a voice that sounds like tombstones falling) has a thing about hourglasses.  So do physicists, but theirs don’t have sand in them.  And they don’t so much represent Eternity as describe it.  Maybe.

The prior post was all about spacetime events (an event is the combination of a specific (x,y,z) spatial location with a specific time t) and how the Minkowski diagram divides the Universe into mutually exclusive pieces: 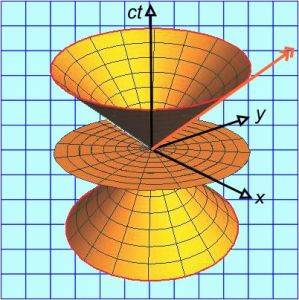 This chart is one dimension closer to what the physicists really think about.  Here we have x and y along distinct axes.  The z axis is perpendicular to all three, and if you can visualize that you’re better at it than I am.  The xy plane (and the xyz cube if you’re good at it) is perpendicular to t.

That orange line was in last week’s diagram and it means the same thing in this one.  It contains events that can use light-speed somehow to communicate with the here-and-now event.  But now we see that the line into the future is just part of a cone (or a hypercone if you’re good at it).

If we ignite a flash of light at time t=0, at any positive time t that lightwave will have expanded to a circle (or bubble) with radius d=c·t. The circles form the “future” cone.

Another cone extends into the past.  It’s made up of all the events from which a flash of light at time at some negative t would reach the here-and-now event.