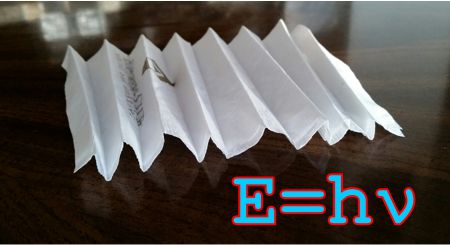 I was walking my daily constitutional when Al waved me into his coffee shop.  “Sy, he’s at it again with the paper napkins.  Do something!”

I looked over.  There was Vinnie at his table, barricaded behind a pile of crumpled-up paper.  I grabbed a chair.

The question was both rhetorical and derivative so I ignored it.  There were opened books under the barricade — upper-level physics texts.  “How come you’re chasing through those books?”

“I wanted to follow up on how LIGO operates with photons after we talked about all that space shuttle stuff.  But geez, Sy!”

“You’re a brave man, Vinnie.  So,  which letters are giving you trouble?”

“These two, that look kinda like each other upside down.” He pointed to one equation, λ=c/ν.

“Ah, wavelength equals the speed of light divided by the frequency.”

“Some of those symbols go way back.  You just get used to them.  Most of them make sense when you learn the names for the letters — lambda (λ) is the peak-to-peak length of a lightwave, and nu (ν) is the number of peaks per second.  If it makes you feel any better, I’ve yet to meet a physicist who can write a zeta (ζ) — they generally just draw a squiggle and move on.”

“And there’s this other equation,” pointing to E=h·ν.  “What’s that about?”

“Good eye.  You just picked two equations that are fundamental to LIGO’s operation.  If a lightwave has frequency ν, the equations tell us two things about it — its energy is h·ν (h is Planck’s constant, 6.6×10-34 Joule-seconds), and its wavelength is c/ν (c is the speed of light).  For instance, yellow light has a frequency near 520×1012/sec.  One photon carries 3.8×10-40 Joules of energy.  Not much, but it adds up when a light beam contains lots of photons.  The same photon has a wavelength near 580×10-9 meters traveling through free space.”

“So what happens when one of those photons is in a LIGO beam?  Won’t a gravitational wave’s stretch-and-squeeze action mess up its wave?” 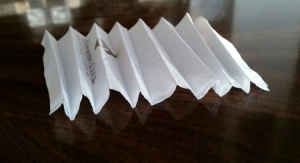 I smoothed out one of Vinnie’s crumpled napkins. As I folded it into pleats and scooted it along the table I said, “Doesn’t mess up the wave so much as change the way we think about it.  We’re used to graphing out a spatial wave as an up-and-down pattern like this that moves through time, right?”

“It’s a paper napkin, f’pitysake, and I’m making a point here. Watch close.  If you monitor a particular point along the wave’s path in space and track how that point moves in time, you get the same profile except we draw it along the t-axis instead of along a space-axis.  See?”

“Hey, the time profile is the space profile going backwards.  Oh, right, it’s goin’ into the past ’cause it’s a memory.”

“That’s one of those things that people miss.  If you only draw sine waves, they’re the same in either direction.  The important point is that although timewaves and spacewaves have the same shape, they’ve got different meanings.  The timewave is directly connected to the wave’s energy by that E equation.  The spacewave is indirectly connected, because your other equation there scales it by the local speed of light.”

“It is, but some of those miles are shorter than others.  Near a heavy mass, for instance, or in the compression phase of a gravitational wave, or inside a transparent material.  If you’re traveling in the lightwave’s inertial frame, you see no variation.  But if you’re watching from an independent inertial frame, you see the lightwave hit a slow patch.  Distance per cycle gets shorter.  Like that lambda-nu equation says, when c gets smaller the wavelength decreases.”