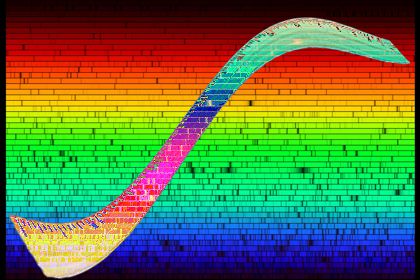 “It’s all about how lightwaves get generated and then what happens.”

“Sy and me talked about that, Cathleen.  Lightwaves come from jiggling electrons, right?”

“Any kind of charged particles, Vinnie, but there’s different ways that can happen.  Each leads to its own kind of spectrum.”

“Different kinds of spectrum?  Do you mean like visible versus infrared and ultraviolet, Cathleen?”

“No, I don’t, Sy.  I’m referring to the thing’s overall appearance in every band.  A hundred and fifty years ago Kirchoff pointed out that light from a source can have lines of color, lines without color, or a smooth display without lines.”

“Like that poster that Al put up between the physicist and astronomer corners?”  (We’re still chatting at a table in Al’s coffee shop.  I’m on my fourth scone.)

“Kind of.  That’s based on a famous image created at Kitt Peak Observatory.  In the background there you see a representation of what Kirchoff called a continuous or black-body spectrum, where all the colors fade smoothly into each other in classic rainbow order.  You’re supposed to ignore the horizontal dark lines.”

“And the vertical lines?”

“They form what Kirchoff called an absorption spectrum.  Each dark vertical represents an isolated color that we don’t get from the Sun.”

“You’re saying we get all the other colors but them, right?”

“Exactly, Vinnie.  The Sun’s chromosphere layer filters those specific wavelengths before they get from the deeper photosphere out into space.”

“Of course.  The Sun contains most of the elements lighter than nickel.  Each kind of atom absorbs its own collection of frequencies.”

“Ah, that’s the quantum thing that Sy and me talked about, right, Sy?”

“Mm-hm.  We only did the hydrogen atom, but the same principles apply.  An electromagnetic wave tickles an atom.  If the wave delivers exactly the right amount of energy, the atom’s chaotic storm of electrons resonates with the energy and goes a different-shaped storm.  But each kind of atom has a limited set of shapes.  If the energy doesn’t match the energy difference between a pair of levels, there’s no absorption and the wave just passes by.”

“Good bet, Vinnie.  The flip side of absorption is emission.  I expect that Cathleen has an emission spectrum somewhere on her laptop there.” 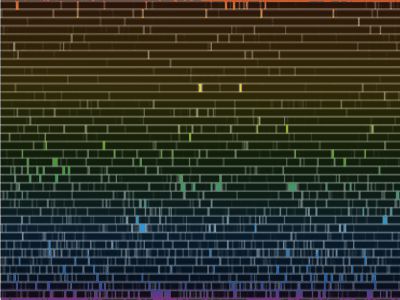 “You’re right, Sy.  It’s not a particularly pretty picture, but it shows that nice strong sodium doublet in the yellow and the broad iron and hydrogen lines down in the green and blue.  I’ll admit it, Vinnie, this is a faked image I made to show my students what the solar atmosphere would look like if you could turn off the photosphere’s continuous blast of light.  The point is that the atoms emit exactly the same sets of colors that they absorb.”

“You do what you gotta do, Cathleen.  But tell me, if each kind of atom does only certain colors, where’s that continuous rainbow come from?  Why aren’t we only getting hydrogen colors?”

“Kirchoff didn’t have a clue on that, Vinnie.  It took 50 years and Einstein to solve it.  Not just where the light comes from but also its energy-wavelength profile.”

“So where does the light come from?”

“Pure heat.  You can get a continuous spectrum from a hot wire, molten lava, a hole through the wall of a hot oven, even the primordial chaos of the Big Bang.  It doesn’t matter what kind of matter you’re looking at, the profile just depends on the temperature.  You know that temperature measures the kinetic energy stored in particle random motion, Vinnie?”

“Well, I wouldn’t have put it that way, but yeah.”

“Well, think about the Sun, just a big ball of really hot atoms and electrons and nuclei, all bouncing off each other in frantic motion.  Every time one of those changes direction it affects the electromagnetic field, jiggles it as you say.  The result of all that jiggling is the continuous spectrum.  Absorption and emission lines come from electrons that are confined to an atom, but heat motion is unconfined.”

“How about hot metal?”

“The atoms are locked in their lattice, but heat jiggles the whole lattice.”