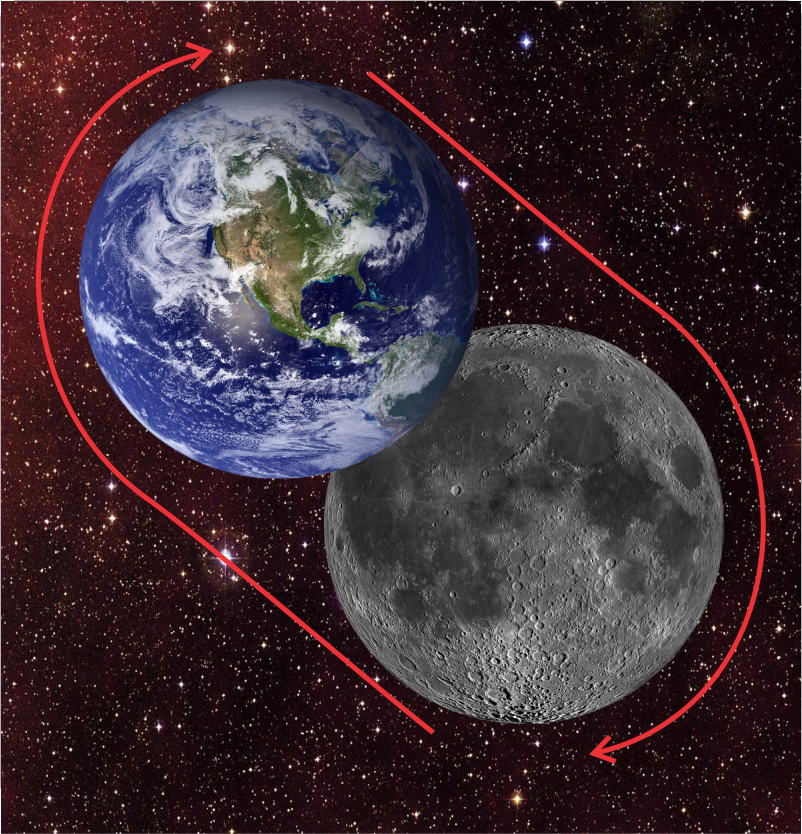 “Sy, I’m startin’ to think you got nothin’. Al and me, we ask what’s pushing the Moon away from us and you give us angular momentum and energy transfers. C’mon, stop dancin’ around and tell us the answer.”

“Yeah, Sy, gravity pulls things together, right, so how come the Moon doesn’t fall right onto us?”

“Not dancing, Vinnie, just laying some groundwork for you. Newton answered Al’s question — the Moon is falling towards us, but it’s going so fast it overshoots. That’s where momentum comes in, Vinnie. Newton showed that a ball shot from a cannon files further depending on how much momentum it gets from the initial kick. If you give it enough momentum, and set your cannon high enough that the ball doesn’t hit trees or mountains, the ball falls beyond the planet and keeps on falling forever in an elliptical orbit.”

“Forever until it hits the cannon.”

“hahaha, Al. Anyway, the ball achieves orbit by converting its linear momentum to angular momentum with the help of gravity. The angular momentum pretty much defines the orbit. In Newton’s gravity‑determined universe, momentum and position together let you predict everything.”

“Mostly. There’s only one kind of linear momentum — straight ahead — but there are two kinds of angular momentum — rotation and revolution.”

“Aw geez, there’s another pair of words I can never keep straight.”

“You and lots of people, Vinnie. They’re synonyms unless you’re talking technicalese. In Physics and Astronomy, rotation with the O gyrates around an object’s own center, like a top or a planet rotating on its axis. Revolution with the E gyrates around some external location, like the planet revolving around its sun. Does that help?”

“Subtle question, Vinnie, but they’re actually all just momentum. Fair warning, I’m going to avoid a few issues that’d get us too far into the relativity weeds. Let’s just say that momentum is one of those conserved quantities. You can transfer momentum from one object to another and convert between forms of momentum, but you can’t create momentum in an isolated system.”

“You’re right, Al, the two are closely related. Newton thought that momentum was THE conserved quantity and all motion depended on it. His arch‑enemy Leibniz said THE conserved quantity was kinetic energy, which he called vis viva. That disagreement was just one battle in the Newton‑Leibniz war. It took science 200 years to understand the momentum/kinetic energy/potential energy triad.”

“Wait, Sy, I’ve seen NASA steer a rocketship and give it a whole different momentum. I don’t see no conservation.”

“You missed an important word, Vinnie — isolated. Momentum calculations apply to mechanical systems — no inputs of mass or non‑mechanical energy. Chemical or nuclear fuels break that rule and get you into a different game.”

“Ah-hahh, so if the Earth and Moon are isolated…”

“Exactly, and you’re way ahead of me. Like we said, no significant net forces coming from the Sun or Jupiter, so no change to our angular momentum.”

“Hey, wait, guys. Solar power. I know we’ve got a ton of sunlight coming in every day.”

“Not relevant, Al. Even though sunlight heats the Earth, mass and momentum aren’t affected by temperature. Anyhow, we’re finally at the point where I can answer your question.”

“Hush. OK, here’s the chain. Earth rotates beneath the Moon and gets its insides stirred up by the Moon’s gravity. The stirring is kinetic energy extracted from the energy of the Earth‑Moon system. The Moon’s revolution or the Earth’s rotation or both must slow down. Remember the M=m·r·c/t equation for angular momentum? The Earth‑Moon system is isolated so the angular momentum M can’t change but the angular velocity c/t goes down. Something’s got to compensate. The system’s mass m doesn’t change. The only thing that can increase is distance r. There’s your answer, guys — conservation of angular momentum forces the Moon to drift outward.”

“Long way to the answer.”