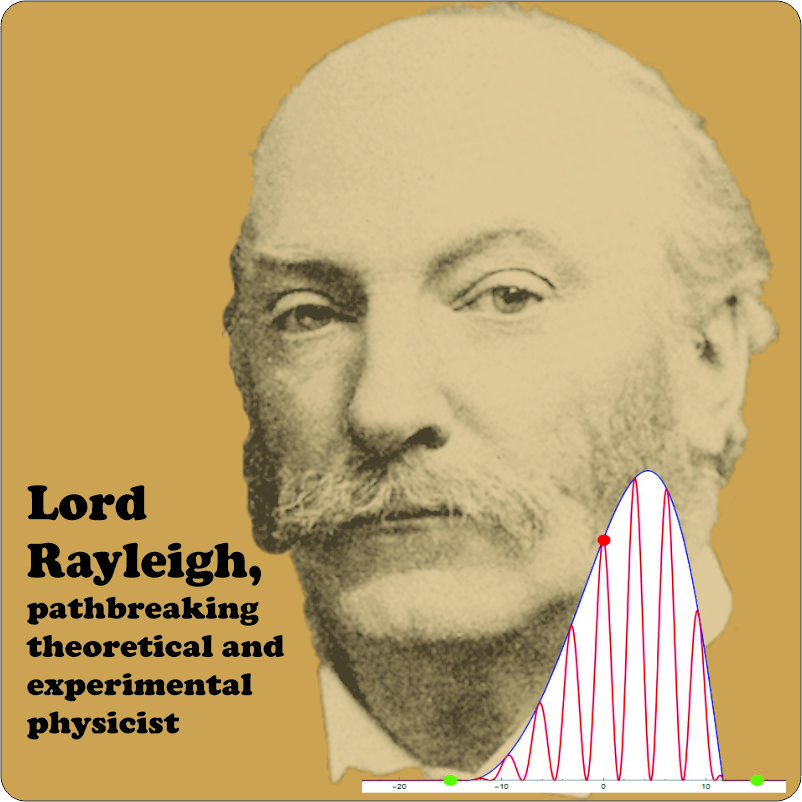 “Have I got this straight, Sy? You’re saying that prisms throw rainbows because light goes slower through glass than in air and that bends the beam, but every frequency lightwave bends a different amount. Also you’re saying all the bending happens when speeds switch at the glass face, not inside the glass. Am I right so far?”

“Perfect, Vinnie, but you skipped an important detail.”

“Still using those ‘most‘ and ‘usually‘ weasel‑words.”

“Guilty as charged, because we’ve finally gotten to the ‘multiple speeds of light‘ thing. Which means I need more precise wording. The wave speed we’ve been talking about so far applies to a specific part of the wave, say the peak or trough. Those are wave phases, so I’m going to call that speed the ‘phase speed‘, OK?”

“Good, because the second speed is different. Among his many important contributions, Lord Rayleigh pointed out that you can’t have a pulse that’s one pure frequency. A single‑frequency wave never starts and never ends. Do you remember the time I combined waves to draw a camel?”

“You did, mostly, but there was funny stuff at his nose and butt.”

“Because I only included about a hundred component waves. It’d take many more to kill those boundary zig‑zags. Any finite wave has the same issue. Rayleigh said that an individual wave has a phase speed, but any ‘peculiarity,’ like a pulse rise or fall, could only be created by a group of waves. The peculiarity could travel at a different speed from the component waves, like a pair of scissors where the cutting point moves faster than either blade.”

“Sounds like carrier wave and sidebands on my ham radio. But if different frequencies have different speeds they’d get all out of sync with each other. How does a photon stay in one piece?”

“The vacuum is non-dispersive — the photon’s component waves all travel at the same speed and stay together. If a medium absorbs some frequency, that makes it dispersive and that changes things.”

“Ah, that’s why you hedged about transparency.”

“Exactly. Throw in a few absorbing atoms, like cobalt that absorbs red or gold that absorbs blue, and you get interesting effects from your sideband components interacting. Skipping some math, the bottom line is simple and cute. The group speed’s equation is just like the phase speed’s except there’s a positive or negative correction term in the denominator.”

“Sy, I don’t like equations, remember? I suppose f is frequency in your correction term but what’s slope?”

“That’s a measure of how rapidly the index changes as the frequency changes. For most frequencies and most media, the slope is very slightly negative because the index slowly descends towards 1.0 at high energies. The vg fraction’s denominator stays just less than nf so the group goes slightly faster than the phase. Near an absorption line, though, things get sloppy. Waves that are just a little off the absorber’s favorite frequency can still interact with it. That changes their speed and the ‘corrected’ refraction index.”

“Gimme a sec … guess I’m OK with the positive slopes but there’s that yellow part where the slope is negative. Wouldn’t that make the fraction’s bottom smaller and the group speed higher?”

“Certainly. In fact, under the right conditions the denominator can be less than 1.0. That pushes the group speed above c — faster than light in vacuum, even though the component waves all run slower than vacuum lightspeed. It’s only the between‑component out‑of‑syncness relationship that scissors along beyond c.”

“You said there’s a third speed?”

“Signals. In a dispersive medium those sideband waves get chaotic and can’t carry information. Wave theory and Einstein agree — chaos may be able to travel faster than light, but information can’t.”