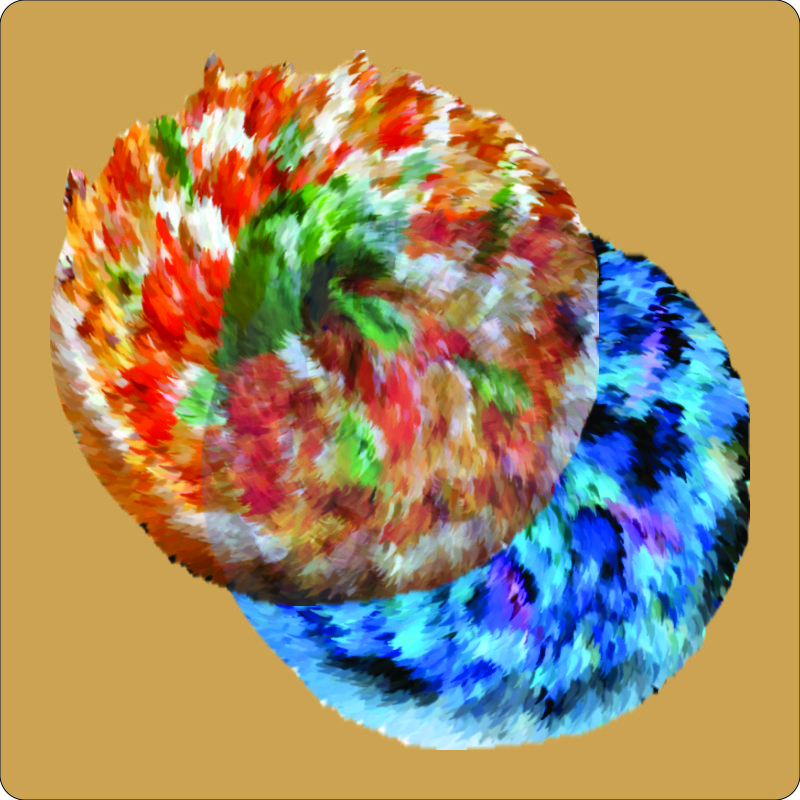 Vinnie gets a far-away look in his eye. I wait. “Ya know, Sy, there oughtta be a way.”

“I ain’t giving up on this faster-than-light communication stuff. I know Einstein said it couldn’t happen because it’d flip cause and effect and he didn’t like that, but that feels too much like philosophy books I’ve read that boil down to, ‘This thing can’t be true because I don’t want it to be.’ Maybe there’s something we ain’t thought of yet.”

“Lots of people have played with that challenge for decades. Do you have any fresh ideas?”

“A couple possibles. Lessee if I’ve got this straight. We’ve got two separate message channels going — one that works instant-like for information between entangled quantum thingies, and one for everything else that’s stuck at lightspeed or less. Suppose I’ve got two entangled pizzas— nah, we’re really talking quantum stuff like electrons and photons so I’ll just say particles. Suppose I’ve got two entangled particles that are some ugly mix of red and green but we know when they’re de-linked they’ll be opposite. I send one to you the regular way but they’re still linked. I look at the one I still got and it’s red, say. The same moment, yours instantly went green but you don’t know that yet until you look or you get status information from me through the not‑instant channel. So the problem is getting information to leak between the two channels, right?”

“That’s about the size of it.”

“OK, try this one. How about I use a magnetic field or something to force mine to red? And maybe a set time later I make it green to confirm I’m in control and it’s a real signal.”

“Sorry, as soon as you manipulate properties in part of an entangled system you break the entanglement and the other part is free to do whatever it wants to. Next?”

“Uhh … time synchronization. How about you and me set a certain time for me to look at mine? You can watch yours and when it flips or not you’ll know.”

“All that does is move the manipulation to the other end of the setup. Me looking at my particle resets yours to whatever color mine isn’t and that breaks the entanglement. Next?”

“Maybe something with a bunch of particles all entangled together? How about—”

“Nup, can’t base a strategy on that. Like everything else quantum, entanglement is statistical. There’s no guarantee that even in our two‑particle system I’ll see green if you see red — the odds are high but not 100%. There’s a proven theorem that says if two particles are ‘maximally entangled,’ adding a third to the system reduces the odds that any two will coordinate their behaviors. A bunch of particles would be even less stable. It’s called the monogamy theorem, care to guess why?”

“Physics fun with metaphors again, cute, but I can see this is a good one. You got anything?”

“Not having to do with entanglement, but I have been playing with a different idea, sort of a blank‑sky approach.”

“Uh-uh, blank. Think about a sky made of dark matter. Dark matter’s subject to gravity but so far as we know it has absolutely no interaction with electromagnetism of any kind — doesn’t play with electrons, light waves, nothing. Einstein based part of his relativity work on Maxwell’s electromagnetism equations. In fact, that’s where the idea came from that ‘c‘ was the speed limit for the Universe. It was a good idea and there’s a huge amount of evidence that he was right. Everything in our Standard Model except the photon is subject to the Lorentz factor. Both light and gravity acting on normal matter travel at c‑speed. Well, maybe the value of c has something to do with how quarks work. Dark matter doesn’t have quarks. What if dark matter has a different speed limit, maybe a lot higher than c or even no limit at all? Maybe we could exploit that property somehow. How about a dark‑matter telegraph?”

“I’m thinking of my Grampa’s recipe for rabbit stew. ‘First you gotta catch your rabbit,’ he used to say,”

“Have I got this straight, Sy? You’re saying that prisms throw rainbows because light goes slower through glass than in air and that bends the beam, but every frequency lightwave bends a different amount. Also you’re saying all the bending happens when speeds switch at the glass face, not inside the glass. Am I right so far?”

“Perfect, Vinnie, but you skipped an important detail.”

“Still using those ‘most‘ and ‘usually‘ weasel‑words.”

“Guilty as charged, because we’ve finally gotten to the ‘multiple speeds of light‘ thing. Which means I need more precise wording. The wave speed we’ve been talking about so far applies to a specific part of the wave, say the peak or trough. Those are wave phases, so I’m going to call that speed the ‘phase speed‘, OK?”

“Good, because the second speed is different. Among his many important contributions, Lord Rayleigh pointed out that you can’t have a pulse that’s one pure frequency. A single‑frequency wave never starts and never ends. Do you remember the time I combined waves to draw a camel?”

“You did, mostly, but there was funny stuff at his nose and butt.”

“Because I only included about a hundred component waves. It’d take many more to kill those boundary zig‑zags. Any finite wave has the same issue. Rayleigh said that an individual wave has a phase speed, but any ‘peculiarity,’ like a pulse rise or fall, could only be created by a group of waves. The peculiarity could travel at a different speed from the component waves, like a pair of scissors where the cutting point moves faster than either blade.”

“Sounds like carrier wave and sidebands on my ham radio. But if different frequencies have different speeds they’d get all out of sync with each other. How does a photon stay in one piece?”

“The vacuum is non-dispersive — the photon’s component waves all travel at the same speed and stay together. If a medium absorbs some frequency, that makes it dispersive and that changes things.”

“Ah, that’s why you hedged about transparency.”

“Exactly. Throw in a few absorbing atoms, like cobalt that absorbs red or gold that absorbs blue, and you get interesting effects from your sideband components interacting. Skipping some math, the bottom line is simple and cute. The group speed’s equation is just like the phase speed’s except there’s a positive or negative correction term in the denominator.”

“Sy, I don’t like equations, remember? I suppose f is frequency in your correction term but what’s slope?”

“That’s a measure of how rapidly the index changes as the frequency changes. For most frequencies and most media, the slope is very slightly negative because the index slowly descends towards 1.0 at high energies. The vg fraction’s denominator stays just less than nf so the group goes slightly faster than the phase. Near an absorption line, though, things get sloppy. Waves that are just a little off the absorber’s favorite frequency can still interact with it. That changes their speed and the ‘corrected’ refraction index.”

“Gimme a sec … guess I’m OK with the positive slopes but there’s that yellow part where the slope is negative. Wouldn’t that make the fraction’s bottom smaller and the group speed higher?”

“Certainly. In fact, under the right conditions the denominator can be less than 1.0. That pushes the group speed above c — faster than light in vacuum, even though the component waves all run slower than vacuum lightspeed. It’s only the between‑component out‑of‑syncness relationship that scissors along beyond c.”

“You said there’s a third speed?”

“Signals. In a dispersive medium those sideband waves get chaotic and can’t carry information. Wave theory and Einstein agree — chaos may be able to travel faster than light, but information can’t.”

Vinnie’s fiddling with his Pizza Eddie’s pizza crumbs. “Hey, Sy, so we got the time standard switched over from that faked 1900 Sun to counting lightwave peaks in a laser beam. I understand why that’s more precise ’cause it’s a counting measure, and it’s repeatable and portable ’cause they can set up a time laser on Mars or wherever that uses the same identical kinds of atoms to do the frequency stuff. All this talk I hear about spacetime, I’m thinkin’ space is linked to time, right? So are they doing smart stuff like that for measuring space?”

“They did in 1960, Vinnie. Before that the meter was defined to be the distance between two carefully positioned scratches on a platinum-iridium bar that was lovingly preserved in a Paris basement vault. In 1960 they went to a new standard. Here, I’ll bring it up on Old Reliable. By the way, it’s spelled m-e-t-e-r stateside, but it’s the same thing.”

“Mmm… Something goofy there. Look at the number. You’ve been going on about how a counted standard is more precise than one that depends on ratios. How can you count 0.73 of a cycle?”

“Sorta, but now you’re counting 165 million peaks. That’s a lot to ask even a grad student to do, if you can trust him.”

“He won’t have to. Twenty-three years later they went to this better definition.”

“Wait, that depends on how accurate we can measure the speed of light. We get more accurate, the number changes. Doesn’t that get us into the ‘different king, different foot-size’ hassle?”

“Quite the contrary. It locks down the size of the unit. Suppose we develop technology that’s good to another half-dozen digits of precision. Then we just tack half-a-dozen zeroes onto that fraction’s denominator after its decimal point. Einstein said that the speed of light is the same everywhere in the Universe. Defining the meter in terms of lightspeed gives us the same kind of good-everywhere metric for space that the atomic clocks give us for time.”

“I suppose, but that doesn’t really get us past that crazy-high count problem.”

“Actually, we’ve got three different strategies for different length scales. For long distances we just use time-of-flight. Pick someplace far away and bounce a laser pulse off of it. Use an atomic clock to measure the round-trip time. Take half that, divide by the defined speed of light and you’ve got the distance in meters. Accuracy is limited only by the clock’s resolution and the pulse’s duration. The Moon’s about a quarter-million miles away which would be about 2½ seconds round-trip. We’ve put reflectors up there that astronomers can track to within a few millimeters.”

“Fine, but when distances get smaller you don’t have as many clock-ticks to work with. Then what do you do?”

“You go to something that doesn’t depend on clock-ticks but is still connected to that constant speed of light. Here, this video on Old Reliable ought to give you a clue.”

“OK, the speed which is a constant is the number of peaks that’s the frequency times the distance between them that’s the wavelength. If I know a wavelength then arithmetic gets me the frequency and vice-versa. Fine, but how do I get either one of them?”

“How do you tune a trombone?”

“Huh? I suppose you just move the slide until you get the note you want.”

“Yup, if a musician has good ear training and good muscle memory they can set the trombone’s resonant tube length to play the right frequency. Table-top laser distance measurements use the same principle. A laser has a resonant cavity between two mirrors. Setting the mirror-to-mirror distance determines the laser’s output. When you match the cavity length to something you want to measure, the laser beam frequency tells you the distance. At smaller scales you use interference techniques to compare wavelengths.”

Vinnie gets a gleam in his eye. “Time-of-flight measurement, eh?” He flicks a pizza crumb across the room.

In a flash Eddie’s standing over our table. “Hey, hotshot, do that again and you’re outta here!”