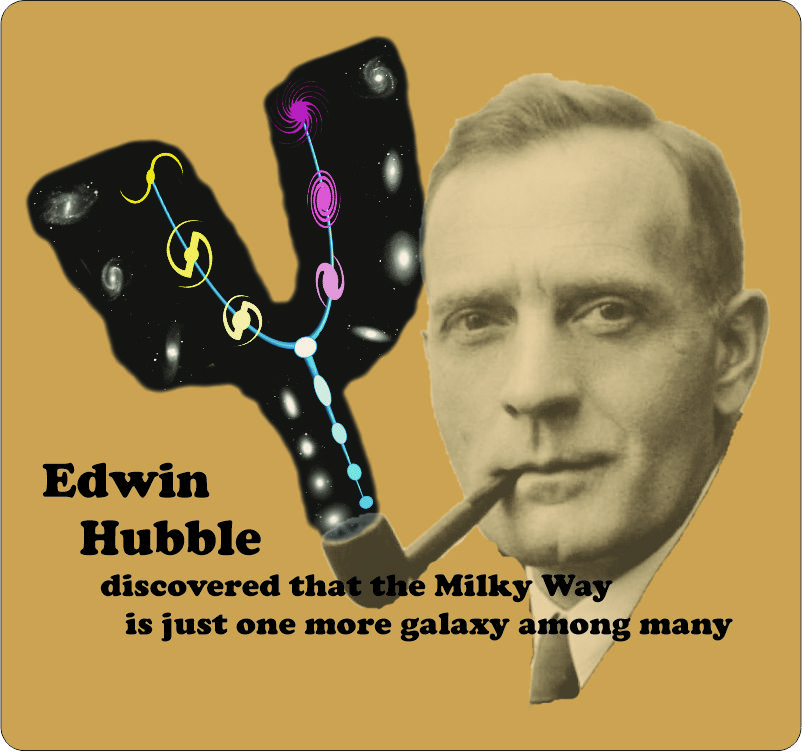 It’s like he’s been taking notes. Mr Feder’s got a gleam in his eye and the corner of his mouth is atwitch. “You’re not getting off that easy, Cathleen. You said that Earendell star’s 66 trillion lightyears away. Can’t be, if the Universe’s only 14 billion years old. What’s going on?”

“Oops, did I say trillion? I meant billion, of course, 109 not 1012. A trillion lightyears would be twenty times further than the edge of our observable universe.”

“Hmph. Even with that fix it’s goofy. Sixty-six billion is still what, five times that 14 billion year age you guys keep touting. I thought light couldn’t travel that far in that time.”

“I thought the Universe is 93 billion light years across.”
”That’s diameter, and it’s just the observable universe.”
”Forty-seven billion radially outward from us.”
”None of that jibes with 14 billion years unless ya got stuff goin’ faster than light.”

“Guys, guys, one thing at a time. About that calculation, I literally did it on the back of an envelope, let’s see if it’s still in my purse … Nope, must be on my office desk. Anyhow, distance is the trickiest part of astronomy. The only distance‑related thing we can measure directly is z, that redshift stretch factor. Locate a familiar pattern in an object’s spectrum and see where its wavelength lies relative to the laboratory values. The go‑to pattern is hydrogen’s Lyman series whose longest wavelength is 121 nanometers. If you see the Lyman pattern start at 242 nanometers, you’ve got z=2. The report says that the lens is at z=2.8 and Earendel’s galaxy is at z=6.2. We’d love to tie those back to distance, but it’s not as easy as we’d like.”

“It’s like radar guns, right? The bigger the stretch, the faster away from us — you should make an equation outta that.”

“They have, Mr Feder, but Doppler’s simple linear relationship is only good for small z, near zero. If z‘s greater than 0.1 or so, relativity’s in play and things get complicated.”

“Wait, the Hubble constant ties distance to speed. That was Hubble’s other big discovery. Old Reliable here says it’s something like 70 kilometers per second for every megaparsec distance. What’s that in normal language? <tapping keys> Whoa, so for every lightyear additional distance, things fly away from us about an inch per second faster. That’s not much.”

“True, Sy, but remember we’re talking distant, barely observable galaxies that are billions of lightyears away. Billions of inches add up. Like with the Doppler calculation, you get startling numbers if you push a simple linear relation like this too far. As an extreme example, your Hubble rule says that light from a galaxy 15 billion lightyears away will never reach us because Hubble Flow moves them away faster than photons fly toward us. We don’t know if that’s true. We think Hubble’s number changes with time. Researchers have built a bucketful of different expansion models for how that can happen; each of them makes different predictions. I’m sure my 66 came from one of those. Anyhow, most people nowadays don’t call it the Hubble constant, it’s the Hubble parameter.”

“Sixty-six or forty-seven or whatever, those diameters still don’t jibe with how long the light’s had a chance to travel.”

“Sy, care to take this? It’s more in your field than mine.”

“Sure, Cathleen. The ‘edge of the observable universe‘ isn’t a shell with a fixed diameter, it simply marks the take-off points for the oldest photons to reach us so far. Suppose Earendel sent us a photon about 13 billion years ago. The JWST caught it last night, but in those 13 billion years the universe expanded enough to insert twenty or thirty billion lightyears of new space between between here and Earendel. The edge is now that much farther away than when the photon’s journey started. A year from now we’ll be seeing photons that are another year older, but the stars they came from will have flown even farther away. Make sense?”

“You could say that.”