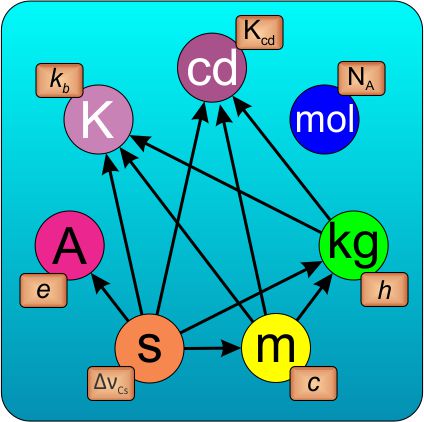 “Hey, Sy, you said there’s seven fundamental standards. We’ve talked about the second and the meter and the kilogram and the ampere. What’s left?”

“The mole, the kelvin and the candela, Al. They’re all kinda special-purpose but each has its charms. The mole, for instance, is cute and fuzzy and has its very own calendar date.”

“You’re pulling our legs, Sy. A cute unit of measure? No way.”

“Hear me out, Vinnie. How many shoes in a dozen pairs?”

“Sure, but it’s easier to work in dozens. How many hydrogen atoms in a dozen H2O molecules?”

“Two dozen, of course. Are we going somewhere here?”

“Next step. A mole is like a dozen on steroids, about 6×1023 whatevers. How many hydrogen atoms in a mole of H2O molecules?”

“Fair hit. How about the fuzzy part and the date?”

“The fuzzy has to do with isotopes. Every element has an atomic number and an atomic weight. The atomic number counts protons in the nucleus –all atoms of an element have the same atomic number. But different isotopes of an element have different numbers of neutrons. The ‘weight’ is protons plus neutrons, averaged across the isotopes. If you’re holding a mole of an element, you’re holding its atomic weight in grams. The fuzzy happens because samples of an element from different sources can have different mixtures of isotopes. You may have some special diamonds that contain nothing but carbon-12. A mole of those atoms masses exactly 12 grams. My sample is enriched with 10% of carbon-13. Mole-for-mole, my carbon is a tad heavier than yours. In fact, 6×1023 of my atoms mass 12.10 grams. That’s an extreme example but you get the idea.”

“What’s the kelvin about then?”

“Temperature. And most solid-state electronics. Zero kelvin is absolute zero, the coldest temperature something can get, when the maximum heat has been sucked out and all its atoms have minimum vibrational energy. From there you heat it up degree by degree until you get to where water can co-exist as liquid, solid and water vapor. It used to be the standard to call that temperature 273.16 K.”

“Used to be? Water doesn’t do that any more?”

“Oh, it still does, but the old standard had problems. It used five different ‘official’ techniques and 16 different calibration checks to cover the range from 3 K up to the melting point of copper. Some of those standards, like the melting pressure of helium-3, are not only inconvenient but expensive. Others led to measured intermediate temperatures that disagree depending on which direction you’re going. The defined standards did nothing for the plasma people who work above 1500 K. It was a mess.”

“So how does the new standard fix that?”

“It exploits new tech, especially in solid-state science. The Boltzmann constant, kB, is sort of the quantum of heat capacity at the microscopic level. The product kBT is a threshold energy. Practically everything that happens at the quantum level depends on the ratio of some process energy divided by kBT. If the ratio’s high the process runs; if it’s low, nothing. In-between, the response is predictably temperature-dependent. Thanks to a plethora of new solid-state thermal sensors that depend on that logic, we now have a handle on the range from microkelvins to kilokelvins and above.”

“Pretty good. What’s the last one?”

“It’s the one I’m least happy about, the candela. It’s a unit for how bright a light source is, sort-of. Take the source’s power output at all optical frequencies and ‘correct’ that by how much each frequency would stimulate a mathematically modeled ‘standard human eye.’ Isolate the ‘corrected’ watts at 555 nanometers, multiply by Kcd=683. It’s a time-hallowed metric that lighting designers depend upon, but it skips over little things like we actually see with rod cells and three kinds of cone cells, none of which match the standard curve. Kcd is just too human-centered to be a universal constant.”

“Humans ain’t universal. We’re not even on Mars.”