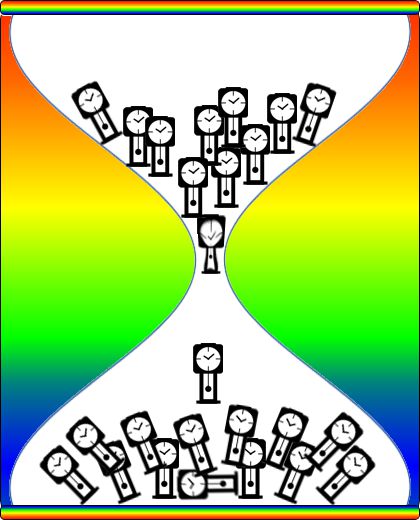 We’re in the Acme Building’s elevator, headed down to Eddie’s for pizza, when there’s a sudden THUNK.  Vinnie’s got his cellphone out and speed-dialed before I’ve registered that we’ve stopped.  “Michael, it’s me, Vinnie.  Hi.  Me and Sy are in elevator three and it just stopped between floors.  Yeah, between six and five.  Of course I know that’s where, I always count floors.  Look, you get us outta here quick and I won’t have to call the rescue squad and you don’t have paperwork, OK?  Warms my heart to hear you say that.  Right.  And there’s pizza in it for you when we’re out.  Thanks, Michael.”  <to me>  “Says it’ll be a few minutes.  You good for climbing out when he levers the doors?”

“Sure, no problem.  Might as well keep on about why the kilogram definition changed.  Oddly enough, the story starts with one of the weirdest standards in Science.  Here, I’ll pull it up on Old Reliable…”

“OK, that’s a weird number in the fraction, but what’s weird about the whole definition?”

“Think about it — when they defined this standard in 1960, it essentially said, ‘Go back sixty years, see how long it took for the Sun to return to exactly where it was in the sky a year earlier, capture exactly that weird fraction of the one-year interval in a bottle and bring it back to the present for comparison with an interval you want to report a time for.‘  Sound doable to you?”

“The key is in those words, ephemeris time.”

“Greenwich Mean Time would be better — ‘mean’ as in ‘average.’  You know the Earth doesn’t spin perfectly, right?”

“Yeah, it wobbles.  The Pole Star won’t be at the pole in a few thousand years.”

“That’s the idea but things are messier than that.  For instance, when a large mass moves around, like a big volcano eruption or a major ice-sheet breakup or monsoon rains using Indian Ocean water to drench Southwest Asia, that causes a twitch in the rotation.”

“Hard to see how those twitches would be measurable.”

“They are when you’re working at 9-digit precision, which atomic clocks exceeded long ago.  Does your GPS unit have that spiffy dual-frequency function for receiving satellite time signals?”

“That’d be about 30 centimeters.  Speed of light’s 3×108 meters per second so you’re depending on satellite radio time-checks good to about, um, 100 nanoseconds, in a data field holding week number and seconds down to nanoseconds.  So you’d expect measurement jitter within … about 2 parts in 1015.  Pretty good, and on that scale those twitches count.”

“What do they do about them?”

“Well, you can’t fix Earth, but you can measure the twitches very carefully and then average over them.  Basically, you list all the Sun-position measurements made over many years, along with the corresponding time as reported by then-current science’s best clocks.  Use those observations to build a mathematical model of where an averaged fake Sun would appear to be at any given moment if it were absolutely regular, no twitches.  When the fake Sun would be at its highest during a given day, that’s noon GMT.”

“Fine, but what’s that got to do with your weird definition?”

“You can run your mathematical model backward in time to see how many times your best-we’ve-got-now clock would tick between fake noon and fake 12:00:01 on that date.  That calibrates your clock.”

“Seems a little circular to me — Sun to clock to model to fake-Sun to clock.”

“Which is why, now that we’ve got really good clocks, they’ve changed the operational definition by dropping the middleman.  The most precise measurements for anything depend on counting.  We now have technology that can count individual peaks in a lightwave signal.  These days the second is defined this way.  If a counter misses one peak, that’s one part in 10 million, three counts per year.  That’s so much better than Solar time they sometimes have to throw in a ‘leap-second’ so the years can keep up with the clocks.”