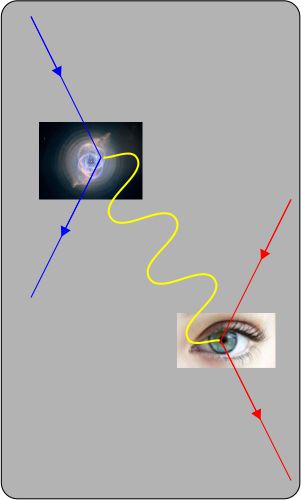 There’s something peculiar in this earlier post where I embroidered on Einstein’s gambit in his epic battle with Bohr.  Here, I’ll self-plagiarize it for you…

Consider some nebula a million light-years away.  A million years ago an electron wobbled in the nebular cloud, generating a spherical electromagnetic wave that expanded at light-speed throughout the Universe.

Last night you got a glimpse of the nebula when that lightwave encountered a retinal cell in your eye.  Instantly, all of the wave’s energy, acting as a photon, energized a single electron in your retina.  That particular lightwave ceased to be active elsewhere in your eye or anywhere else on that million-light-year spherical shell.

Suppose that photon was yellow light, smack in the middle of the optical spectrum.  Its wavelength, about 580nm, says that the single far-away electron gave its spherical wave about 2.1eV (3.4×10-19 joules) of energy.  By the time it hit your eye that energy was spread over an area of a trillion square lightyears.  Your retinal cell’s cross-section is about 3 square micrometers so the cell can intercept only a teeny fraction of the wavefront.  Multiplying the wave’s energy by that fraction, I calculated that the cell should be able to collect only 10-75 joules.  You’d get that amount of energy from a 100W yellow light bulb that flashed for 10-73 seconds.  Like you’d notice.

But that microminiscule blink isn’t what you saw.  You saw one full photon-worth of yellow light, all 2.1eV of it, with no dilution by expansion.  Water waves sure don’t work that way, thank Heavens, or we’d be tsunami’d several times a day by earthquakes occurring near some ocean somewhere. 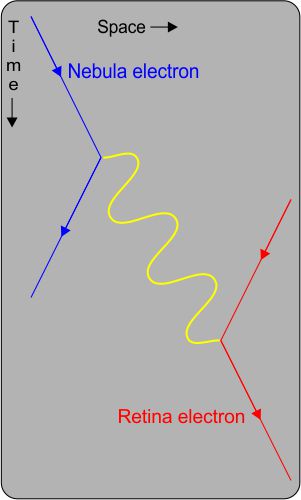 Here we have a Feynman diagram, named for the Nobel-winning (1965) physicist who invented it and much else.  The diagram plots out the transaction we just discussed.  Not a conventional x-y plot, it shows Space, Time and particles.  To the left, that far-away electron emits a photon signified by the yellow wiggly line.  The photon has momentum so the electron must recoil away from it.

The photon proceeds on its million-lightyear journey across the diagram.  When it encounters that electron in your eye, the photon is immediately and completely converted to electron energy and momentum.

Here’s the thing.  This megayear Feynman diagram and the numbers behind it are identical to what you’d draw for the same kind of yellow-light electron-photon-electron interaction but across just a one-millimeter gap.

It’s an essential part of the quantum formalism — the amount of energy in a given transition is independent of the mechanical details (what the electrons were doing when the photon was emitted/absorbed, the photon’s route and trip time, which other atoms are in either neighborhood, etc.).  All that matters is the system’s starting and ending states.  (In fact, some complicated but legitimate Feynman diagrams let intermediate particles travel faster than lightspeed if they disappear before the process completes.  Hint.)

Because they don’t share a common history our nebular and retinal electrons are not entangled by the usual definition.  Nonetheless, like entanglement this transaction has Action-At-A-Distance stickers all over it.  First, and this was Einstein’s objection, the entire wave function disappears from everywhere in the Universe the instant its energy is delivered to a specific location.  Second, the Feynman calculation describes a time-independent, distance-independent connection between two permanently isolated particles.  Kinda romantic, maybe, but it’d be a boring movie plot.

As Einstein maintained, quantum mechanics is inherently non-local.  In QM change at one location is instantaneously reflected in change elsewhere as if two remote thingies are parts of one thingy whose left hand always knows what its right hand is doing.

Bohr didn’t care but Einstein did because relativity theory is based on geometry which is all about location. In relativity, change here can influence what happens there only by way of light or gravitational waves that travel at lightspeed.

In his book Spooky Action At A Distance, George Musser describes several non-quantum examples of non-locality.  In each case, there’s no signal transmission but somehow there’s a remote status change anyway.  We don’t (yet) know a good mechanism for making that happen.

It all suggests two speed limits, one for light and matter and the other for Einstein’s “deeper reality” beneath quantum mechanics.