“Aw, Mommie, I had another question for Uncle Sy.  And I’m not sleepy yet anyhow.”

“You know me better than that, Sis, but I’ll try.  What’s your question, Teena?”

“You said something once about quantum and Schroeder’s famous kittycat.  Why is it famous?  If it’s quantum it must be a very, very small cat.  Is it magic?”

“But Uncle Sy, how can you tell?  Sometimes Tommie our kittycat looks sound asleep but he’s not really because he can hear when Mommie opens the cat-food can.”

“Tommie loves to sit in boxes.”

“Schrödinger’s Cat’s box is sealed tight.  You can’t see into it.”

“So how do you know whether he’s asleep?”

“That was Mr Schrödinger’s point.  We can’t know, so we have to suppose it’s both.  Many people have made jokes about that.  Mr. Schrödinger said the usual interpretation of quantum mechanics is ridiculous and his cat story was his way of proving that.  The cat doesn’t even have to be quantum-small and the story still works.”

“How could it be halfway?  Either his eyes are open or they’re … wait, sometimes Tommie squints, is that it?”

“Nice try, but no.  Do you remember when we were looking at the bird murmuration and I asked you to point to its middle?”

“Oh, yes, and it was making a beautiful spiral.  Mommie, you should have seen it!”

“Were there any birds right at its middle?”

“Um, no-o.  All around the middle but not right there.”

“Birds to the left, birds to the right, but no birds in the middle.  But if I’d I asked you to point to the place where the birds were, you’d’ve pointed to the middle.”

“You see how that’s like Mr Schrödinger’s cat’s situation?  It’s really asleep or maybe it’s really awake, but if we’re asked for just one answer we’d have to say ‘halfway between.’  Which is silly just like Mr Schrödinger said — by the usual quantum calculation we’d have to consider his cat to be half awake.  That was part of the long argument between Mr Einstein and the other scientist.”

“Wait, Sy, I didn’t hear that part of you two’s conversation on the porch.  What argument was that?”

“This was Einstein’s big debate with Niels Bohr.  Bohr maintained that all we could ever know about the quantum world are the probabilities the calculations yielded.  Einstein held that the probabilities had to result from processes taking place in some underlying reality.  Cat reality here, which we can resolve by opening the box, but the same issue applies across the board at the quantum level.  The problem’s more general than it appears, because much the same issue appears any time you can have a mixture of two or more states.  Are you asleep yet, Sweetie?”

“OK.  Entanglement, for instance.  Pretty much the same logic that Schrödinger disparaged can also apply to quantum particles on different paths through space.  Fire off any process that emits a pair of particles, photons for instance.  The wave function that describes both of them together persists through time so if you measure a property for one of them, say polarization direction, you know what that property is for the other one without traveling to measure it.  So far, so good.  What drove Einstein to deplore the whole theory is that the first particle instantaneously notifies the other one that it’s been measured.  That goes directly counter to Einstein’s Theory of Relativity which says that communication can’t go any faster than the speed of light.  Aaand I think she’s asleep.”

“G’night, Sis.  Let me know the next time you do that meatloaf recipe.” 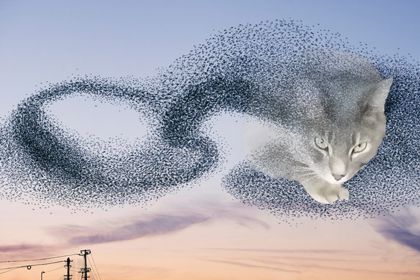