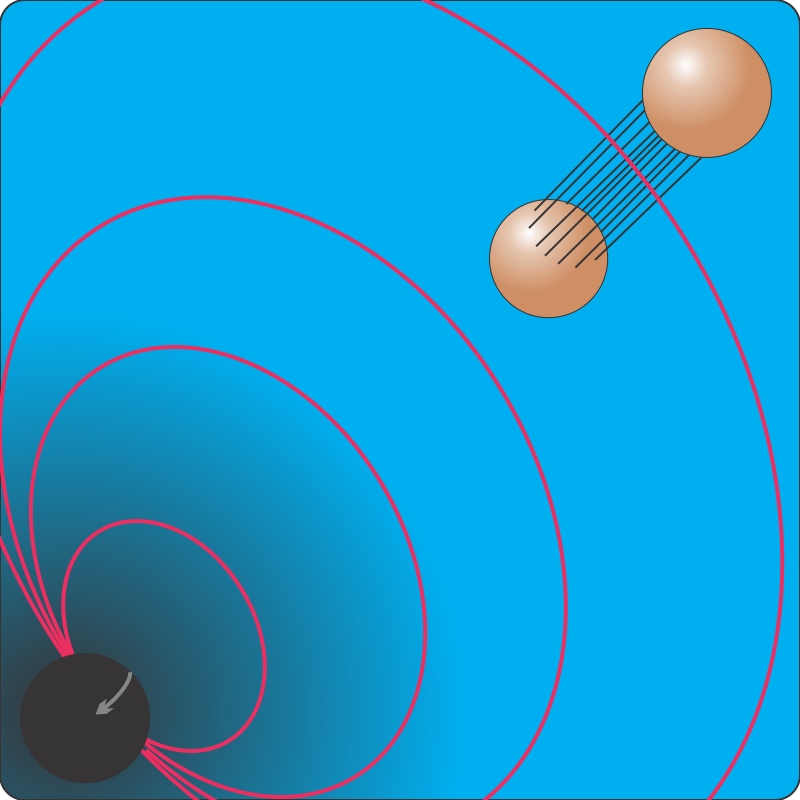 A computerish voice, aggressive but feminine, with a hint of desperation. “Commander Baird will be with you shortly, Mr Moire. Please hold.”

“Ms Baird. Congratulations on the promotion.”

“Your posts about phase-based weaponry got me thinking. I assembled a team, we demonstrated a proof of concept and now Federation ships are being equipped with the Baird‑Prymaat ShieldSaw. Works a treat on Klingon and Romulan shielding. So thank you.”

“My pleasure. Where are you now?”

“I’m on a research ship called the Invigilator. We’re orbiting black hole number 77203 in our catalog. We call it ‘Lonesome‘.”

“Because there’s so little other matter in the space nearby. The poor thing barely has an accretion disk.”

“No, it’s exciting, because it’s so close to a theoretical ideal. It’s like the perfectly flat plane and the frictionless pulley — in real life there are always irregularities that the simple equations can’t account for. For black holes, our only complete solutions assume that the collapsed star is floating in an empty Universe with no impinging gravitational or electromagnetic fields. That doesn’t happen, of course, but Lonesome comes close.”

“But if we understand the theoretical cases and it nearly matches one, why bother with it at all?”

“In a way, yes. Or at least that’s what we’re working on. We think we have a way to extract power from a black hole. It’ll supply inexhaustible cheap energy for a new Star Fleet anti‑matter factory. “

“I thought the only thing that could escape a black hole’s Event Horizon was Hawking radiation, and it cheats.”

“Gravity escapes honestly. Its intense field generates some unexpected effects. Your physicist Roger Penrose used gravity to explain the polar jets that decorate so many compact objects including black holes. He calculated that if a comet or an atom or something else breakable shatters when it falls into a spinning compact object’s gravitational field, some pieces would be trapped there but under the right conditions other pieces would slingshot outward with more energy than they had going in. In effect, the extra energy would come from the compact object’s angular momentum.”

“And that’s what you’re planning to do? How are you going to trap the expelled pieces?”

“No, that’s not what we’re planning. Too random to be controlled with our current containment field technology. We’re going pure electromagnetic, turning Lonesome into a giant motor‑generator. We know it has a stable magnetic field and it’s spinning rapidly. We’ll start by giving Lonesome some close company. There’s enough junk in its accretion disk for several Neptune‑sized planets. The plan is to use space tugs to haul in the big stuff and Bussard technology for the dust, all to assemble a pair of Ceres-sized planetoids. W’re calling them Pine and Road. We’ll park them in a convenient equatorial orbit in a Lagrange‑stable configuration so Pine, Road and Lonesome stay in a straight line.”

“The Interstellar Movie Database. Anyhow, when the planetoids are out there we string conducting tractor beams between them. If we locate Pine and Road properly, Lonesome’s rotating magnetic field lines will cross the fields at right angles and induce a steady electric current. Power for the anti‑matter synthesizers.”

“Ah, so like Penrose’s process you’re going to drain off some of Lonesome‘s rotational kinetic energy. Won’t it run out?”

“Lonesome‘s mass is half again heavier than your Sun’s, Mr Moire. It’ll spin for a long, long time.”

“Umm … that ‘convenient orbit.’ Lonesome‘s diameter is so small that orbits will be pretty speedy. <calculating quickly with Old Reliable> Even 200 million kilometers away you’d circle Lonesome in less than 15 minutes. Will the magnetic field that far out be strong enough for your purposes?”

“Almost certainly so, but the gravimagnetodynamic equations don’t have exact solutions. We’re not going to know until we get there.”